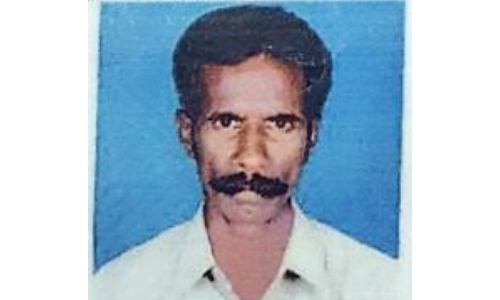 Manama : An Indian expatriate who has been living illegally in Bahrain for the past two years is in desperate need of help after his Saudi sponsor stranded him in the Kingdom.

Udair Karuppaiah, an Indian citizen, came to Saudi Arabia seven years ago and worked as a labourer for a Saudi sponsor for SR900 (BD90). A few years later Karuppaiah was brought to Bahrain by the Saudi sponsor on a visit visa for three months in 2015, and since then he has been stranded in Bahrain.

“I came to Saudi Arabia to provide a better life for my mentally challenged son and a daughter. A few years ago, my sponsor took me to Bahrain to take care of his house in Bahrain. But, for the past one year, he hasn’t paid me my salary or provided me with food,” Karuppaiah told DT News.

“I pleaded my sponsor to send me back as my daughter was critical, or pay me my money so that I could send it to my family for my daughter’s treatment but he kept on postponing things and my daughter is now no more. My daughter passed away on April 2016, and I wasn’t even able to see her for the last time,” said a grief-stricken Karuppaiah.

“I went to the Indian embassy a lot of times but they are telling me that they are helpless as there is a BD1000 fine on me because my sponsor did not renew my visa after those three months visit visa,” he said.

“I am in a miserable condition, I have no food to eat, no money, my sponsor is not responding, I don’t know how to clear the fine as my sponsor hasn’t paid me for a year. Moreover, my passport is also expired, I have been living illegally in the country since 2015,” he said. “I just want to get my dues cleared and go back to India to see my family, I am really helpless. I urge the officials to help me out so that I can go back to my family in India,” Karuppaiah added.