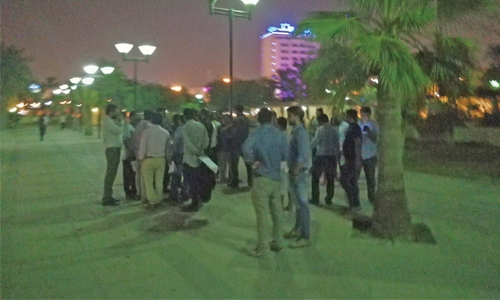 Manama : The workers of the construction company, who staged a protest at Andalus Garden last Thursday for non-payment of salaries, will receive their dues in the next six months, an official of the Ministry of Labour & Social Development assured yesterday.

According to Ahmed Al-Haiki, Labour Inspection Director, around 240 employees of the company have been paid so far but another 115 are yet to be paid.

“Among those who have not been paid are former staff members who left Bahrain but the company have made an agreement with them about making the payment after six months,” he said.

“Whom the company has paid so far are the people who have remained with the company and who have low salary. The staff with the high salaries have not been paid yet, they will be paid within six months. They have paid 240 staff, this includes both expatriates and Bahrainis. Of this, 35 are Bahrainis and the rest non-Bahrainis. There are around 115 who have not received their salaries. This group will receive the pending amount within six months,” he said.

“The company ran into financial issues and currently lack funds to pay the employees and they are also not able to take up any projects from its clients. The company has assured us that everything will be taken care of within the next six months. They will not only pay the pending salaries but also the indemnity, leave pay and all other settlement amounts,” Al-Haiki said.