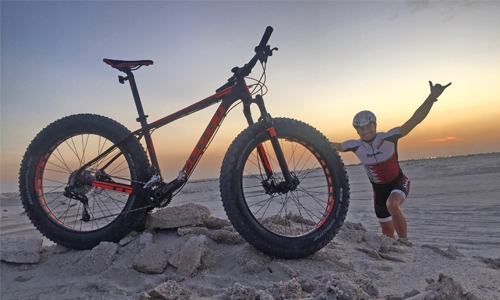 Manama : Bahrain is set to participate in the Extreme Fat Bike competition taking place on 25 February in Canada, under the directives of HH Shaikh Nasser bin Hamad Al Khalifa, Representative of His Majesty the King for Charity Works and Youth Affairs, Chairman of the Supreme Council for Youth and Sports, President of Bahrain Olympic Committee.

Moussa Karich and Mikel Calahorra will cycle 37km over the ice, facing snow storms and fighting high winds under freezing temperatures below -30C to cross Lake Saint-Jean, Quebec an event only for the toughest athletes in the world.

HH Shaikh Khalid bin Hamad Al Khalifa, president of the Bahrain Cycling Association, regarding the participation of the two Bahrain representatives said: “We are delighted to have riders represent Bahrain in such a unique event. Although, we don’t have similar conditions in Bahrain, the fact that our riders can bring the experience of such events to us. They have been training in the sand and warm conditions, yet we are confident that they can take on such an extreme race. We look forward to hosting fat bike sand races in the future as it gains more popularity. Cycling in Bahrain continues to grow whether it’s through the new pro team Bahrain-Merida, hosting of major event such as the Asian cycling championship, or participating in world championships and top events such as this participation by Mikel and Moussa.”

Extreme cold temperatures are fought with special equipment and clothing. Bilodeau Canada, special extreme cold clothing company, made with technical fabric, furs and natural animal skin from Canada spices, will provide the Bahraini athletes with the proper clothing to support temperatures lower than -30C. Fat bikes are a particular type of mountain bikes designed to ride in harsh terrains such as sand and snow.

The size and thickness of the wheels are bigger and wider than usual bikes to assure the grip and control needed for that kind of surfaces. Karich and Calahorra will be riding FELT bikes, and have been training in the Bahraini desert. “The feeling of riding on snow comparing to sand are very similar which will give us an excellent preparation for the event,”Calahorra said.

Water and electricity tariff to double for expats in Bahrain