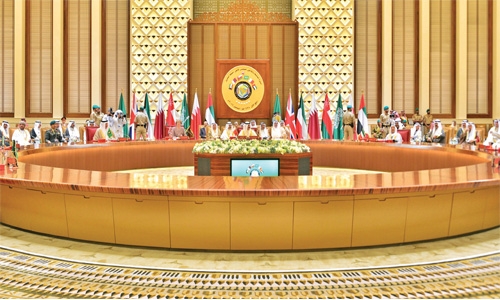 Manama : The Gulf Cooperation Council nations and the United Kingdom yesterday jointly agreed to meet annually, in a similar high-level format, to advance and build up on the UK-GCC strategic partnership announced.

The partnership aims to foster closer relations in all areas including politics, defence, security, trade as well as in developing collective approaches to regional issues.

In another major decision, the summit also endorsed the GCC-UK Joint Action Plan as agreed by their Foreign Ministers and called for its full implementation.

Based on which, the GCC leaders instructed their Ministers to review and extend the timeframe and scope of the current GCC-UK Joint Action Plan (JAP) (2015-2018) in light of the commitments made at this summit. This was revealed in the joint communiqué of the first Summit of the Gulf Cooperation Council - United Kingdom concluded in Bahrain yesterday.

The Summit, according to the communiqué, also reached a shared recognition that there is no military solution to the current armed civil conflicts in the region.

In this regard, the British Prime Minister, Theresa may, affirmed that the UK remains committed in working with the GCC member states to deter external aggression and interference.

Besides, the leaders stressed that they will be working towards achieving a sustainable political solution for the most pressing conflicts in the region (Syria, Iraq, Yemen, and Libya, as well as the Middle East Peace Process).

The leaders reaffirmed that Assad has lost all legitimacy and has no role in Syria’s future and that the international community needs to be united in calling for the Assad regime and its backers, including Russia and Iran, to support a meaningful end to the violence.

Proposing to adhere to the UN proposals, the summit urged parties in the Yemen to end unilateral actions which undermines peace efforts. The summit also urged unhindered support to the UN Humanitarian Response Plan for Yemen for 2017.

Decisions were also taken to prevent the resupply of weapons to Houti forces and to delivers humanitarian assistance to all parts of Yemen by the King Salman Humanitarian Aid and Relief Centre, other GCC states and UK aid organisations. The Summit also decided to work together in the reconstruction process of the Yemen.

Strongly affirming the need to end Israel-Palestine conflict, the Summit urged both parties to demonstrate, through policies and action, genuine advance of the Two-State solution. Moving on the summit required the Libyan parties to accept the UN-brokered Libyan Political Agreement, and emphasised the need to fight all terrorist groups operating in the Lebanese territory. The summit also expressed its commitment to support cooperation between the IMF and Egypt.

Agreed close collaboration and partnership in education, healthcare, culture, sport and the arts, including through the British Council, and working with the Centre for Environment, Fisheries and Aquaculture Science (CEFAS) on marine environmental issues.

To address the threats by Al Qaeda, Daesh and their affiliates, the GCC member states and the UK will work together to cut off terrorist financing sources, enhance intelligence exchange and freeze assets of individuals and entities. Information on suspected foreign terrorist fighters (FTF) will be shared, besides enhancing traveller screening and biometrics collection capabilities.

Military cooperation will be increased through joint exercises and by enhancing Britain’s presence in the Gulf via. Regional British Defence Staff to be based in Dubai. A National Security Dialogue will be established to coordinate security issues and regional response to crises.

A GCC-UK PPP Conference will be held in London in the first quarter of 2017, focusing on GCC national transformation and economic diversification plans.