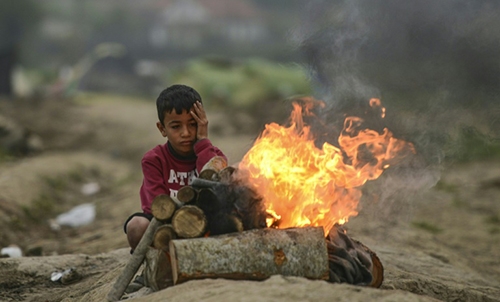 Athens: Greek and EU authorities were putting the final touches to an operation that could send hundreds of migrants back to Turkey on Monday, launching a landmark deal that has been slammed by rights watchdogs.

The operation is set to begin on the Greek island of Lesbos where there are over 3,300 migrants, a term that includes refugees.

But details of how the operation will proceed -- and who and how many migrants will be transferred -- are sketchy and Greek officials on Sunday were tight-lipped.

Turkish Interior Minister Efkan Ala said his country had made preparations to receive 500 people on Monday, and that the Greeks had given the names of 400.

"We have been in touch with the Greek authorities and said we could take 500 people and they have given us 400 names. Tomorrow it's possible that this figure could change," Ala was quoted as saying by the Anatolia news agency.

The mobilisation could involve other Aegean islands with major refugee and migrant populations such as Chios, where agents of EU border agency Frontex were seen arriving on Sunday, an AFP reporter said.

Greek state news agency ANA, in a report that has not been denied by the government, has said the first wave could entail some 750 migrants, who would be sent back between Monday and Wednesday.

They would be sent from Lesbos to the Turkish port of Dikili, adding that Frontex had chartered two Turkish leisure vessels for the operation, it said.

Police sources on Lesbos on Sunday said there had been a flurry of last-minute asylum applications by refugees and migrants seeking to avoid expulsion.

Under the EU deal, all "new irregular migrants" who arrived in Greece after March 20 face being sent back to Turkey -- although the deal calls for each case to be examined individually.

In addition, for every Syrian refugee being returned to Turkey from the Greek islands, another Syrian refugee will be will be resettled from Turkey to the EU, with numbers capped at 72,000.

The idea of this is to reduce the incentive for Syrian refugees to board dangerous smugglers' boats to Europe, as they will have hope of being resettled directly from refugee camps in Turkey.

But on the Aegean islands themselves, many migrants have complained of not being given sufficient time and access to the asylum procedure.

Anas al-Bakhr, a Syrian engineer from Homs, said police marked his date of arrival on Chios as March 20 -- the day the EU-Turkey migration deal nominally took effect -- even though he arrived on the 19th.

"They said the computers were broken that day", Anas told AFP.

On the other side of the Aegean, work is underway on a centre to host those sent back to the Turkish tourist resort of Cesme.

Another is being created in Dikili, opposite Lesbos -- the island that has handled the bulk of the influx of people fleeing conflict and poverty in the Middle East and elsewhere.

The EU-Turkey deal is the latest attempt to stem the number of people in search of a new life in Europe. More than a million migrants entered last year, and over 150,000 people have crossed the Aegean Sea to Greece in 2016.

The operation to resettle Syrians to Europe under the one-for-one arrangement also starts Monday.

Germany expects to take in a first group of about 35 Syrian asylum seekers from Turkey on Monday, the German interior ministry said on Sunday.

Several dozen Syrians are also expected to arrive Monday in France, Finland and Portugal, according to German government sources.

The deal has faced strong opposition from rights groups.

Amnesty International has accused Turkey of illegally forcing groups of some 100 Syrians to return every day, saying the alleged expulsions showed "fatal flaws" in the migrant deal agreed with the EU.

Turkey rejects the charge, insisting it still adopts the open-door policy that for the last few years has allowed any Syrian fleeing civil war back home to seek refuge.

There are over 52,000 refugees and migrants currently in Greece, according to official figures.

With most facilities already full, authorities are trying to create space for an additional 30,000 people in new camps.

Adding to the urgency, sporadic violence has broken out between ethnic migrant groups in the overcrowded camps.

But many migrants are reluctant to move to organised centres, fearing that they will not be allowed to leave.

German Interior Minister Thomas de Maiziere, quoted by the Tagesspiegel am Sonntag weekly, voiced optimism on Sunday that the refugee influx had peaked.

But, he suggested, agreements with countries in North Africa may be needed to prevent mass arrivals in future.

William, Kate to be welcomed by King Khan, Aishwarya Rai