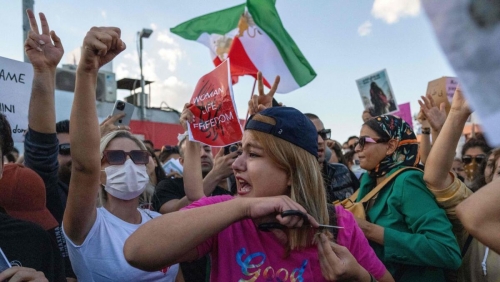 Thousands of people marched in Paris on Sunday to condemn Iran's leadership in a giant show of solidarity with the protests that erupted nationwide after the death of Mahsa Amini.

"Join the first feminist revolution!" and "Mahsa Amini — your name has made the tyranny of the ayatollahs shake!" were among the slogans carried by the protesters as they braved sometimes pouring rain.

They chanted "Woman. Life. Freedom", the three words that have become the main slogan of the protests.

They also sung along with the song "Baraye" ("For") which Iranian songwriter Shervin Hajipour put together using Twitter postings about the protests.

The song became a huge viral hit on Instagram, moving many to tears, but Hajipour has now been arrested in a symbol of the vehemence of the crackdown against the protests in Iran.

Despite a crackdown that according to the Iran Human Rights (IHR) group has left 92 dead and severe cuts to the internet, protests are continuing in Iran every day.

"For once, it is the women who have risen up and are being joined by the men. This is really the time to try to change things," said Guilda Torabi, a student of Iranian origin.

"They go out to protest, but they get killed. We are lucky to be able to demonstrate and fight for them. So we will keep on coming," she said.

Toura Dana, a French-Iranian engineer, added: "Now we have become the voice of the Iranian people who are cut off. Now Iran has become one big prison."

But their speeches, especially Rousseau's, were marked by loud boos from many present, with the Iranian diaspora known globally for its diversity of political opinion.

Also present was French graphic book author Marjane Satrapi whose classic "Persepolis" tells the story of the girl growing up in post-revolutionary Iran and dealing with the obligatory hijab.

Protesters voiced anger that French President Emmanuel Macron had met Iranian counterpart Ebrahim Raisi in New York on the sidelines of the UN General Assembly shortly after the death of Amini.

"The French government flirts with the mullahs while the mullahs kill women," read one slogan above an image of Macron shaking hands with Raisi.