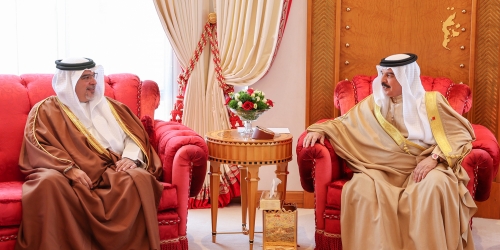 His Majesty King Hamad bin Isa Al Khalifa has welcomed the upcoming historic official visit of His Holiness Pope Francis to Bahrain, as well as that of His Eminence Dr Ahmed Al Tayeb, the Grand Imam of Al Azhar.

Both Pope Francis and Dr Al Tayeb are participating in the “Bahrain Forum for Dialogue: East and West for Human Coexistence”, which will be held under the patronage of His Majesty the King on November 3-4.

HM King Hamad praised the major role played by them to promote the culture of dialogue, coexistence and tolerance, as well as support human fraternity.

While tackling regional and global issues, His Majesty reaffirmed the Kingdom’s stance on the importance of activating the channels of dialogue, negotiations and peaceful solutions to achieve peace and progress for all countries.

HM the King expressed pride in HRH Prince Salman’s dedicated work and fruitful efforts to consolidate all development paths, and adopt plans and programmes to develop all government sectors, valuing highly the wide-ranging achievements attained by the government thanks to the dedication, hard work and solidarity of its competencies.

During the meeting, they reviewed a number of local issues, particularly ways to enhance the landmark achievements attained by the Kingdom under the comprehensive development and renaissance witnessed by Bahrain at all levels to better serve the nation and the citizens.

HM the King stressed that the fraternal Saudi visit would strengthen the deep-rooted bilateral relations, bolster joint cooperation and coordination, as well as consolidate joint action in a way that would benefit both kingdoms and serve the aspirations of their brotherly peoples.