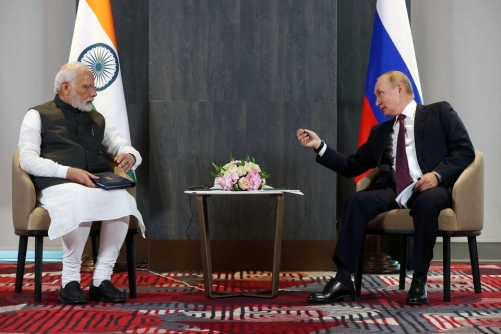 Indian Prime Minister Narendra Modi told Russian President Vladimir Putin yesterday that now was not the time for war, directly assailing the Kremlin chief in public over the nearly seven-month-long conflict in Ukraine.

Locked in a confrontation with the West over the war, Putin has repeatedly said Russia is not isolated because it can look eastwards to major Asian powers such as China and India. But at a summit of the Shanghai Cooperation Organisation (SCO), concerns spilled out into the open. “

I know that today’s era is not an era of war, and I have spoken to you on the phone about this,” Modi told Putin at a televised meeting in the ancient Uzbek Silk Road city of Samarkand. As Modi made the remark, Russia’s paramount leader since 1999 pursed his lips, glanced at Modi and then looked down before touching the hair on the back of his head.

Putin told Modi that he understood the Indian leader had concerns about Ukraine, but that Moscow was doing everything it could to end the conflict. “I know your position on the conflict in Ukraine, the concerns that you constantly express,” Putin said.

“We will do everything to stop this as soon as possible.” He said Ukraine had rejected negotiations. Ukraine has said it will fight until it drives all Russian troops from its land. Ukrainian President Volodymyr Zelenskiy says he will never accept a “peace” that allows Russia to keep Ukrainian land.

The war in Ukraine, triggered when Putin ordered troops to invade on Feb. 24, has killed tens of thousands of soldiers, touched off the worst confrontation with the West since the Cold War and sent the global economy into an inflationary spiral.

India has become Russia’s No. 2 oil buyer after China as others have cut purchases following the invasion. Putin told Chinese President Xi Jinping on Thursday he understood that Xi had concerns about the situation in Ukraine but praised Beijing’s leader for a “balanced” position on the conflict.

‘Colour revolutions’ Xi, on his first trip outside China since early 2020, did not mention the war in Ukraine in public. The Chinese leader said the world had entered a new period of turmoil and that partners such as Putin and Central Asian leaders should prevent foreign powers from instigating “colour revolutions”.

“The world has entered a new period of turbulent change, we must grasp the trend of the times, strengthen solidarity and cooperation, and promote the construction of a closer community of destiny with the Shanghai Cooperation Organization,” Xi said.

“We should support each other’s efforts to safeguard security and development interests, prevent external forces from staging colour revolutions, and jointly oppose interference in the internal affairs of other countries under any pretext.”

Xi criticised “zero-sum games and bloc politics”, a veiled reference to the United States which Beijing has criticised in the past for leaning on allies to counter China’s spectacular rise to the status of a superpower in waiting.