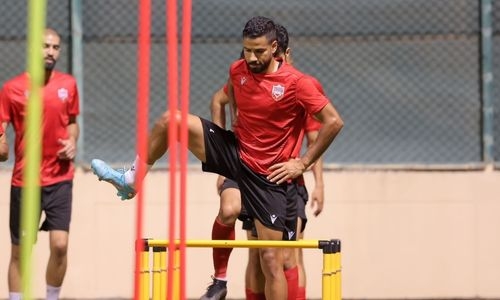 Bahrain’s senior men’s national football team kicked off last night their latest training camp in the Kingdom. The nationals are preparing for a pair of upcoming friendlies this month, which is part of their programme leading up to their highly anticipated title-defence in the Gulf Cup and the AFC Asian Cup, both happening next year. The nationals held their opening practice session at the Hamad Town Stadium under the supervision of head coach Helio Sousa and his staff.

All but one of the players were present yesterday, with Jakarta-based Abdulla Yusuf having a club fixture today. He is scheduled to join training by Monday, according to a national team official.

The Bahrainis will play their first tune-up game next week against Cape Verde on September 23, and then face off with Panama on September 27, which will also be the final day of this training camp. Both contests are to be held at the National Stadium in Riffa, kicking off at 7pm each time.

The friendlies are the second and third warm-up games scheduled by the BFA for the senior men’s team. They have added to the game Bahrain will be playing against FIFA World Cup 2022 participants Serbia on November 18, also at home. Both Cape Verde and Panama are classified above Bahrain in the FIFA World Ranking. Cape Verde are in the Confederation of African Football, and they are currently 72nd in the world.