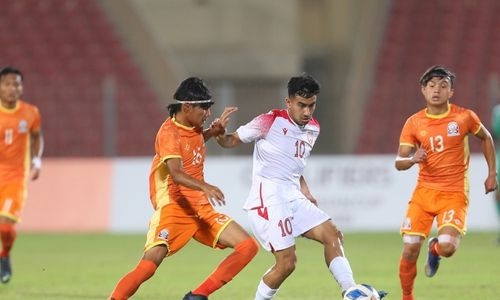 Bahrain made the most of home-field advantage and posted a hard-earned 2-1 victory over Bhutan last night in the Group B qualifiers for the AFC U-20 Asian Cup 2023, currently being held in the Kingdom. Skipper Mohammed Mubarak Habib and midfielder Salem Isa Aldoseri were both on target for the hosts on either side of half-time. For Bhutan, forward Santa Kumar Limboo fired in their consolation goal. The result earned the Bahrainis their second successive victory of the qualifiers, while Bhutan suffered their third loss in four games.

Bahrain stayed in second place on the division standings after improving to seven points, while Bhutan completed their qualification campaign with three points from a single victory. The nationals remained behind Qatar on the Group B table. The Qataris outclassed Bangladesh 3-0 in yesterday’s other game to remain undefeated in three matches. The result kept them in first place with nine points, while Bangladesh suffered their first loss and are third with four points. Only one matchday remains in the qualifiers being held in Bahrain.

That will be played tomorrow, with Nepal taking on Bangladesh at 6pm followed by Qatar and Bahrain clashing at 9pm. Both fixtures will take place at the Shaikh Ali bin Mohammed Al Khalifa Stadium in Arad. The Bahrainis’ match with their Qatari counterparts will determine the Group B winners, who will earn an automatic spot at next year’s AFC U-20 Asian Cup.

A draw or loss for Bahrain could put them in second place in the division, and they will hope to be one of the best five runners-up from the qualifiers to secure their place in the tournament proper. In Bahrain’s win last night, the home side took the lead in the 20th minute after being awarded a penalty when Abdulla Jamal Hashem was taken down in the box by Bhutan goalkeeper Dorji Gyeltshen. Habib stepped up to take the spot kick and he sent his effort to the right of the net. That was enough to put the Bahrainis ahead heading into the locker rooms.

In the second half, Habib was this time the supplier of the assist that led to their second goal in the 60th minute. His low cross from the right was left uncleared by the Bhutan defence, and Aldoseri pounced and tapped the ball in from close range.

The nationals should have tripled their advantage just three minutes later when they were given another penalty after midfielder Sayed Ali Naser was tripped in the area by Bhutan defender Kinzang Tshering, but Habib’s left-footed shot was poorly hit and was saved by Gyeltshen. The visitors then gave Bahrain a scare when they reduced the deficit in the 76th minute with their lone goal—a left-footed effort to the bottom-right corner by Limboo.