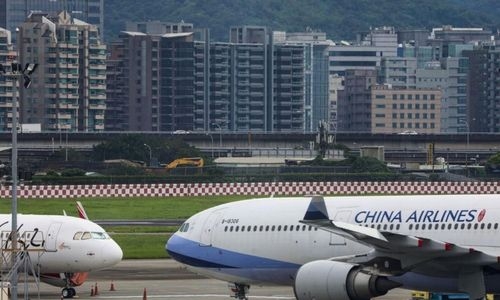 Taiwan cancelled airline flights on Thursday as China fired missiles and deployed fighter jets and warships during military exercises near the self-ruled island, adding to the risk of disruptions in the flow of Taiwanese-made processor chips needed by global telecom and auto industries.

“They are starting to think of solutions, re-routing, delaying orders until they have more clarity,” said Garcia Herrero. “I think people are realizing this is not just a four-day thing.”

On Thursday, at least 40 flights to and from Taiwan were cancelled, according to the China Times newspaper. It cited Taoyuan Airport in the capital, Taipei, as saying cancellations were “not necessarily” related to the military drills.

There was no immediate indication of the possible impact on shipping, which has the potential to jolt the global economy. Taiwan produces more than half the processor chips used in smartphones, autos, tablet computers and other electronics. Chip sales to Chinese factories that assemble most of the world’s consumer electronics rose 24.4% last year to $104.3 billion.

Any significant disruption would “create shockwaves to global industries,” said Rajiv Biswas of S&P Global Market Intelligence in an email.

That could push up already high inflation in the United States and Europe the same way prices spiked after the coronavirus disrupted shipping in 2020-21, said Garcia Herrero.

“If ports can’t operate normally, we can see the consequences,” she said. Taiwan’s Defence Ministry said it tracked the firing of missiles at waters northeast and southwest of the island.

Some flights to the mainland would detour through Hong Kong. Taiwan’s transport minister, Wang Kwo-tsai, said Wednesday at a news conference.

Business between the two sides has grown even as Xi’s government stepped up pressure, sending growing numbers of fighter planes and bombers to fly around Taiwan to intimidate its government.