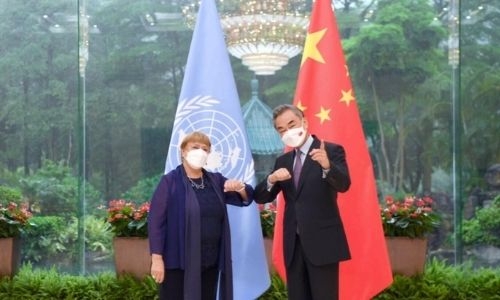 It was a mistake for the United Nations human rights chief to agree to visit China, the US State Department said on Tuesday, amid concerns that government restrictions on her access could undermine scrutiny of Beijing’s rights record.

During her six-day trip that began on Monday, UN High Commissioner for Human Rights Michelle Bachelet will visit China’s western Xinjiang region, where her office said last year it believed mostly Muslim ethnic Uyghurs have been unlawfully detained, mistreated and forced to work.

The United States has labelled their treatment “genocide”, but Beijing denies all abuses. “We have no expectation that the PRC (People’s Republic of China) will grant the necessary access required to conduct a complete, unmanipulated assessment of the human rights environment in Xinjiang,” State Department spokesman Ned Price told a regular news briefing.

“We think it was a mistake to agree to a visit under the circumstances,” Price said, adding that Bachelet would not be able to obtain a full picture “of the atrocities, the crimes against humanity, and genocide” in the region.

Asked if China’s leader Xi Jinping was responsible for the abuses, Price said it would be “hard for us to imagine” that the senior-most levels of the Chinese government were not aware.

He added that media reports on Tuesday of thousands of leaked photos and documents from public security bureaus in two Xinjiang counties add to an “already damning body of evidence” of abuses there.

Bachelet has called for unfettered access in Xinjiang, but China’s foreign ministry has said her visit will be conducted in a “closed loop”, referring to a way of isolating people within a “bubble” to prevent the Covid-19 virus from potentially spreading.

China initially denied the existence of any detention camps, but then later admitted it had set up “vocational training centres” necessary to curb what it said was terrorism, separatism and religious radicalism in Xinjiang.