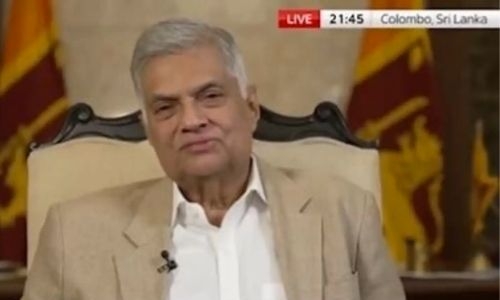 A video of new Sri Lankan Prime Minister Ranil Wickremesinghe has gone viral on social media which purportedly shows the leader joking over tourists’ visting the island nation that is facing its worst economic crisis in decades. The video in wide circulation has been edited from Wickremesinghe’s interview with Sky News where he commented on a question on tourists saying those looking for an exciting time can visit Sri Lanka as there are several options now.

One of the users lashed at the new PM tagging the incumbent minister of tourism on Twitter to enlighten the PM that foreign exchange generated through tourism is the need of the hour.
During the interview, the anchor paused and asked that his question on tourism was a serious question as it is an important part of any emerging market. "It's good to see you being lighthearted," the journalist added.

"But you are not encouraging people to visit Sri Lanka or are you? It's a genuine question," the journalist posed another question later. "We are not discouraging people from visiting but we understand the shortage of foreign exchange and some of the demonstrations going on and the shortage of essentials that they may not visit Sri Lanka this time," responded Wickremesinghe.

This particular part of the interview has gone viral as users are criticising the Prime Minister for his gesture. In the same interview, the PM targeted the last administration over the current economic crisis and said Sri Lanka has never faced such a situation where the country has no dollars, no rupees.

"I can understand the anguish of the protesters - the young and the old. The young who see their future being taken away, and the old, who are suffering, the middle class, who see their lifestyle collapsing… farmers without fertiliser. There are many demonstrations outside police stations, petrol stations and other places. And it shows the anger, the despair, and the hopelessness that the people feel," he added.

Sri Lanka has defaulted on its debt on Wednesday for the first time in its history as the country struggles with its worst financial crisis in more than 70 years.