Russia says it destroyed large weapons consignment from US, Europe in Ukraine | THE DAILY TRIBUNE | KINGDOM OF BAHRAIN 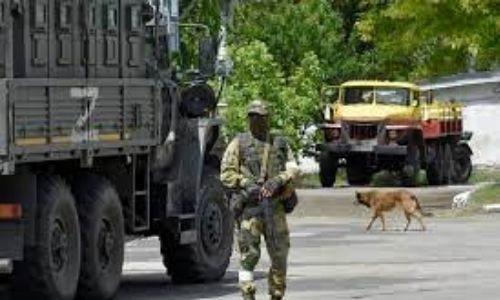 The defence ministry said in a statement the strike took out "a large batch of weapons and military equipment delivered from the USA and European countries" and intended for Ukrainian troops in the eastern Donbas region where the fighting is concentrated.

Reuters could not independently verify the report, which also said Russian missiles had struck fuel storage facilities near Odesa on the Black Sea coast and shot down two Ukrainian Su-25 aircraft and 14 drones.

In its latest update on the war, which Russia calls a "special military operation", the defence ministry also said Russia had struck numerous Ukrainian command posts.

The West has stepped up weapons supplies to Ukraine since Russia's Feb. 24 invasion and Russia's military is trying to intercept and destroy them. Moscow says Western arms deliveries for Kyiv, and the imposition of drastic sanctions against the Russian economy, amount to a "proxy war" by the United States and its allies.