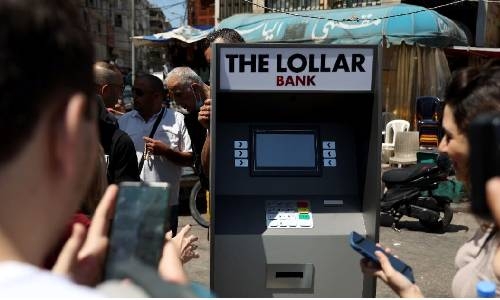 Lebanese activists on Friday rolled out mock banknotes featuring paintings of a gutted central bank or the Beirut port explosion to denounce high-level corruption that has helped to wreck the country.

The collapse of the Lebanese pound and frozen bank accounts have left Lebanon with a confusing currency system, with a multitude of exchange rates applying to various situations in daily life.

The dollars stuck in accounts that citizens can only withdraw in Lebanese pounds at a fraction of their original value are known locally as “lollars”.

With parliamentary elections two days away, the Lebanese Transparency Association (LTA) decided to take the joke to the streets, with a stunt encouraging people to use “lollars” for the day.

The “monetary disobedience” campaign, entitled “Currency of Corruption”, encourages people to print their own “funny money” at home and try to use it as a means of raising awareness.

“We will not adapt to this mockery anymore, we are #NotPayingThePrice,” the LTA said in a statement unveiling the campaign and its hashtag.

On one of Beirut’s main squares on Friday, organisers installed a fake ATM from which passers-by could withdraw “lollars”.

LTA communications officer Hazar Assi said the campaign was aimed at reminding voters that their current plight was to blame on the country’s corrupt hereditary leaders.

“When people vote, they should make a choice based on accountability and rejecting the corruption that is affecting all of our lives,” she said.

Lebanon’s traditional parties will seek to extend their stranglehold on power in parliamentary elections on Sunday but a new generation of independent candidates are hoping for a breakthrough.