US model poses in front of father's coffin a funeral, people call it 'disgusting' | THE DAILY TRIBUNE | KINGDOM OF BAHRAIN 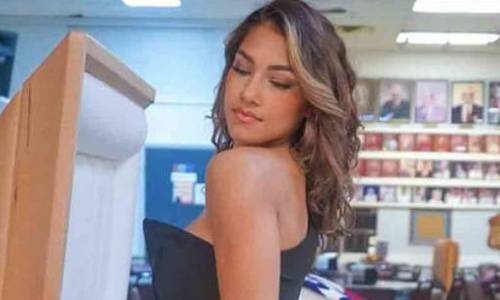 Big influencers are known to take photos and videos regularly in order to get engagements on their profiles.

Then there are micro-influencers, people with a sizeable social media following but smaller than a celebrity's, who like taking photos of themselves at random locations just to keep their feed ticking and followers engaged.

While it is not wrong or unethical to work for social media engagement, there are a few places and occasions where it's best to keep the phone away and pause all blogging or vlogging activities.

A funeral is one such occasion. That's precisely the reason why influencer Jayne Rivera, an influencer from Florida, has been slammed heavily.

According to reports, Jayne posted a series of eight photos. One of them showed her smiling,  another showed her hands clasped together in prayer, and there was one in which she glanced over her shoulder while looking away from the lens.

The so-called touching tribute to the departed didn't go down well with netizens. Many followers were appalled by the post, some even called it 'vile' and 'disgusting'.

A user wrote, “Not cool Jayne, ur dad was a decorated vet, a photo shot by his casket should be beneath you. May he rest in eternal peace."

“The fact that u would post something like this tells us everything we need to know about you,” wrote another.

Before she deleted the account, she received a lot of replies from users who told her to delete the pictures and apologise for the post.

As damage control, she deactivated her account, which boasts an impressive 84,000 followers, but didn’t issue an apology or make any public statements.

She is also followed by more than 3 lakh people on TikTok for her fashion and travel posts.

Lights on, nobody applying; skills shortage bites as Australia reopens