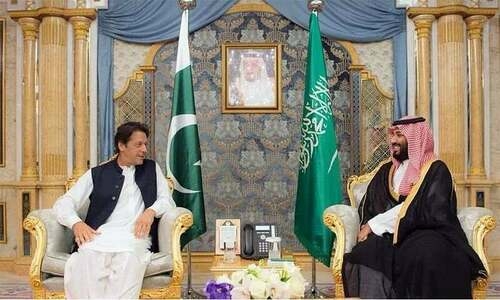 Pakistan gets $4.2 billion lifeline from Saudi Arabia, a day after Prime Minister Imran returned from the three-day visit to the Kingdom , attending the Middle East Green Initiative of the Saudi Crown Prince.

The Saudi financial package includes a $3 billion cash assistance and $1.2 billion worth of oil supply on deferred payments, according to the Saudi Press Agency.

"The Saudi Fund for Development in a 'generous gesture' announced a deposit of $3 billion with the State Bank of Pakistan to help the government support its foreign currency reserves and counter the impact of the Corona pandemic. The SPA reported that the deposit was in addition, to an oil deferred payment facility of $1.2 billion for petroleum products, during the year," the SPA said in a statement.

The Saudi news agency said that the gesture reflected the Saudi Kingdom’s continued position in supporting the economy of Pakistan.

Finance Adviser Shaukat Tarin and Energy Minister Hammad Azhar would address a press conference to share details of the deal later in the day.

In a series of tweets, Pakistani ministers also shared the announcement and said Saudi timely financial assistance will help Pakistan's economy facing a challenging environment in the wake of rising commodity prices and the Covid-19 pandemic.

In a tweet, Pakistan's Information Minister Fawad Chaudhry said Saudi Arabia would deposit $3 billion cash in the State Bank of Pakistan while $1.2 billion worth of oil will be provided on deferred payments.

In a tweet early Wednesday, Tarin said: “Yesterday evening the Finance Minister of Saudi Arabia informed me of the generous gesture of the Kingdom of Saudi Arabia to place US$3bn with SBP & a $1.2bn deferred oil facility to help the balance of payment of Pakistan.”

“We thank the Crown Prince & the KSA for this kind gesture.”

Hammad Azhar, who also accompanied the Prime Minister on his visit to Saudi Arabia, said the package will help ease pressures on Pakistan trade and forex accounts.

"The Saudi Development Fund has generously announced for Pakistan an oil deferred payments facility of $1.2bn/annum and a $3 bn deposit with SBP. This will help ease pressures on our trade & forex accounts as a result of global commodities price surge," Hammad Azhar tweeted.

Samiullah Tariq, head of research at Pak Kuwait Investment Company, said the Saudi package would help ease pressure on Pakistan’s foreign exchange reserves and the rupee due to the recent sharp hike in global commodity prices.

The rupee traded under pressure on Wednesday against the  major currencies. On Tuesday, it nosedived to its lowest value of Rs175.27 against the US dollar. The foreign exchange reserves also dipped by $1.7 billion to $17.5 billion during the week ending October 15.

It is the second financial assistance package that Saudi Arabia has extended to Pakistan in the past three years.

The Kingdom had extended a similar package valued $6 billion in October 2018 to provide breathing space before starting negotiations with the International Monetary Fund (IMF). Later Pakistan had to return $2 billion of the $3 billion deposits.

"The Saudi government would immediately deposit $3 billion in Pakistan’s central bank account for a year and keep it rolling at least until the completion of the IMF programme in October 2023," Dawn reported.

Referring to a federal minister, the Express Tribune said that the Saudi government would charge interest rate that will be around the cost of debt taken from the international financial institutions. Last time, Saudi Arabia had charged about 3.2 per cent interest rate on its $3 billion cash deposit.

WHO seeks further clarification on India's Covaxin before approval