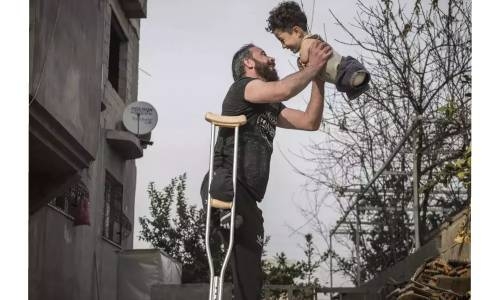 A Turkish photographer has won a prestigious photography prize for capturing a bittersweet moment between a father and son.

Mehmet Aslan won Photo of the Year at the Siena International Photo Awards with his image "The Hardship of Life."

The image depicts father and son, Munzir and Mustafa playing together outside their home in Reyhanli, in the Turkish province of Hatay, at the border with Syria.

Mustafa, aged five, was born without lower or upper limbs due to tetra-amelia, a congenital disorder caused by his mother Zeynep's medications after being poisoned by nerve gas released during the war in Syria.

Munzir is shown balancing using a crutch as he tosses his son in the air. Munzir lost his right leg when a bomb was dropped as he walked through a bazaar in Idlib, Syria.

While showing a beautiful moment between father and son, the photo also highlights a lack of access to medical care.

Mustafa will need special electronic prostheses in the future, which, are not yet available in Turkey.

The photo won in a competition between tens of thousands of images submitted by photographers from 163 countries.

The winners will be on display at an exhibition in Siena, Italy, from October 23, at the Siena Awards, an international festival of visual arts.