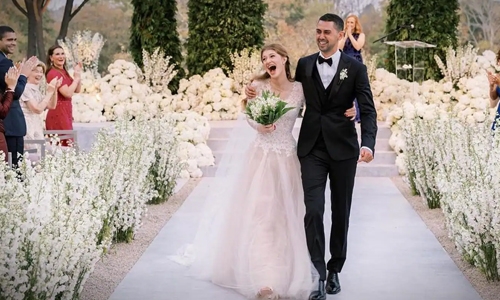 Jennifer Gates, the daughter of Bill Gates and Melinda Gates, married beau Nayel Nassar on Saturday. The lavish wedding took place at Jennifer's 124-acre horse farm (worth $15.82 million) in upstate New York, which was reportedly bought for her by Bill in 2018. The duo had gotten engaged in January 2020. Read on to find out more about the groom.

Nassar, 30, is an equestrian by profession and met his lady love on a show-jumping circuit. Born to Egyptian parents in Chicago, Nassar grew up in Kuwait, taking to horseback riding from a young age. He graduated from Stanford University in Economics in 2013 while Jennifer is a 2018 Human Biology graduate of the same varsity. The couple shares passion for equestrian sport.

Both of them competed together in international events until Jennifer started medical school in 2019. She is set to graduate in 2023. Aside from being a professional sports figure, Nassar is also into business. He had established his company called Nassar Stables LLC back in 2014 in California. Jennifer is, in fact, the founder of Evergate Stables, which is now co-managed by the two.

According to his biography, the young man has qualified for the FEI (Fédération Equestre Internationale) World Cup Finals in 2013, 2014, and 2017. He also played in the FEI World Equestrian Games 2014. But most recently, the son of millionaire parents competed in the Tokyo Olympics, marking the first time in 61 years that Egypt's equestrian team had qualified for the coveted event.

Apart from this, Nassar is fluent in three languages-- Arabic, French, and English. Now coming to their dreamy wedding, the 25-year-old bride wore an ivory Vera Wang Haute gown while the groom rocked an Armani tuxedo. They first had Katb el Kitab or the Islamic marriage ceremony after which they exchanged vows in a ceremony facilitated by a longtime family friend, reported Vogue.