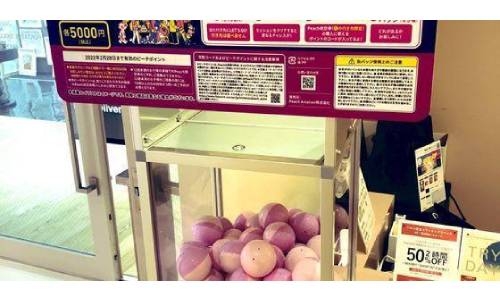 Many enthusiastic travellers around the world are keen to explore new horizons this year and 2022.
As Covid cases have dropped significantly in many countries, travellers are now a little more confident about visiting new places.
The tourism industry took a major blow in 2020 due to lockdowns and strict quarantine rules. But now, airlines and other travel companies have started welcoming people with safety assurances and attractive offers.
But some companies are doing a little extra to entice tourists and travel enthusiasts who have been longing to go on an adventure.
For example, take the case of this unique travel offer from Peach Aviation, a Japanese budget airline.
They're looking to revive tourism in the country by offering people a chance to go on mystery holidays, tickets for which are being dispensed through vending machines.
The tickets for the destinations are available on gachapon capsules that are dispensed from vending machines set up in several places.
These vending machines usually dispense only small toys for children. But Peach Aviation is now using them to sell tickets from Tokyo’s Haneda Airport or Osaka’s Kansai International to several mystery locations. But the destinations are all domestic, none are international.
The tickets can send people to places like Sapporo, Sendai, Nagoya, Fukuoka and Naha, according to reports.
According to reports, many people in the company were not too optimistic about the idea initially.
"Promoting trips where travellers can’t choose the destination probably wouldn’t fly. We were thinking that it would be alright if we could sell one capsule per day,’ Shuntaro Kosasa, brand manager at Peach’s branding and communication department," told The Japan Times.
But much to their surprise, the gachapon tickets became a hit in a few days. Reports say the airline has already sold more than 3,000 tickets in the past two months.
The tickets, which cost ¥5,000 (Rs 3,285) each, feature a code for awarding points.