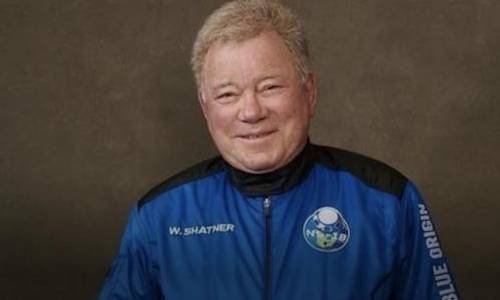 Legendary Canadian actor William Shatner's reel-life career turned into a reality after he blasted into the space on Jeff Bezos' Blue Origin rocket on Wednesday. The 90-year-old Shatner, best known for his portrayal of Captain James T Kirk of the USS Enterprise in the Star Trek franchise, became the oldest person to go to space.

"What you have given me is the most profound experience I can imagine. I'm so filled with emotion about what just happened," he said while talking to media, and moved to tears.

The intergalactic voyages of the USS Enterprise, commanded by Shatner's character Kirk, helped turn American attention to the stars as the US space program was starting out.

Shatner, on Wednesday, was joined on the 11-minute journey beyond Earth's atmosphere and back again by three others: Blue Origin executive Audrey Powers, Planet Labs co-founder Chris Boshuizen, and Glen de Vries of Medidata Solutions.

"You're looking into blackness, into black ugliness," Shatner said. "And you look down, there's the blue down there - and the black up there - and it's just, there is Mother Earth."

Shatner - who embodied the promise of space travel in the classic 1960s TV series "Star Trek" and seven subsequent films - said he had prepared himself for experiencing weightlessness but was stunned at the dramatic contrast of the beauty of the blue Earth and the blackness of space.

"Is that the way death is?" Shatner asked.

Before the flight, each astronaut rang a bell and then entered the capsule atop the rocketship, with Bezos closing the hatch. Winds were light and skies were clear for the launch, conducted after two delays totaling roughly 45 minutes.

The mission was a replay of the company's maiden human flight in July, which included Bezos and was seen as a breakthrough moment for the nascent space tourism sector.

Shatner has been acting since the 1950s and remains busy with entertainment projects and fan conventions. He is best known for starring as Captain James Tiberius Kirk of the starship Enterprise on "Star Trek."

During the opening credits of each episode of the series, he called space "the final frontier" and promised, "to explore strange new worlds, to seek out new life and new civilizations, to boldly go where no man has gone before."

Space tourism is going through a renaissance. A dozen of high-value individuals had paid to visit the Internation Space Station (ISS) throughout the 2000s. However, such flights, organised under the patronage of the Russian space agency, ceased in 2009.

Now, the sector has revived because numerous private companies and billionaires are chasing the business, such as Bezos' Blue Origin, Elon Musk's SpaceX, and Richard Branson's Virgin Galactic Holdings Inc.

While Bezos simply invites some people to fly on New Shepard, he also sells other seats. On the other hand, Branson puts a ticket price, starting at $450,000 against the space voyage.

Blue Origin is planning another crewed flight this year. The Jeff Bezos company launched its first human flight on July 20. Whereas British billionaire Richard Branson blasted off to space in his own spaceship, Virgin Galactic on July 11. And in September, Elon Musk's spaceflight company SpaceX launched four private passengers on a three-day trip whizzing around the planet on a reusable Falcon 9 rocket.