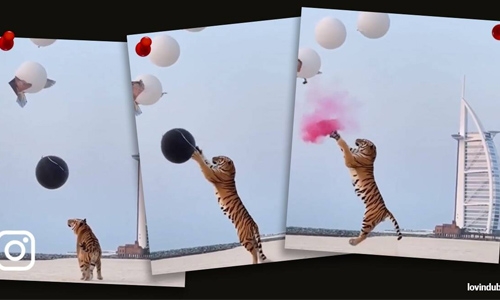 Gender reveal parties seem to get weirder by the day and this latest viral clip where a tiger was used for the reveal is substantiating the same.

A Dubai-based couple is being criticised after they used a tiger for their gender reveal party. A video of the event, which has gone viral on several social media platforms. has triggered outrage online with many condemning the use of the wild cat for the reveal party.

According to local reports, the clip was originally posted on Instagram by user Carlotta Cavallari along with a caption that read, “Gender reveal gone #wild 🐅💝congrats mama @dxexb.” The user concluded the post with a disclaimer stating that the tiger was not harmed and plastic was disposed of.

In the viral clip, a tiger is seen walking towards a black coloured balloon and bursting it to reveal the gender of the baby.

The clip, which received over 900 likes was reshared by the popular Instagram page ‘Lovin Dubai’, which is dedicated to the event happening in the city and went viral thereafter.

Garnering over 3 lakh views, the viral clip has been flooded with netizens calling out the couple for using a tiger for the event. “Is this legal?” enquired a user, while another commented, “This isn’t something to be proud of. These animals are not pets.”