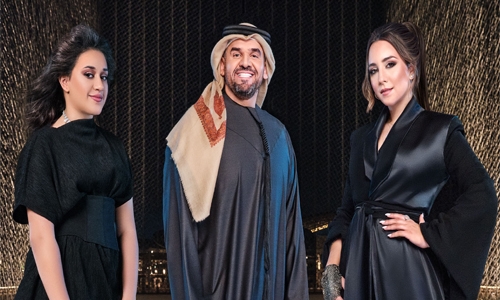 Generations of Arab musical talent have banded together for Expo 2020 Dubai’s official anthem.

Released on Tuesday, This Is Our Time has veteran pop star Hussain Al Jassmi joining fellow Emirati and rising talent Almas and Lebanese singer Mayssa Karaa for an uplifting ode to the event, which begins on October 1.

Produced by Canadian Grammy Award winner Greg Wells, who was behind the 2019 Special Olympics World Games Abu Dhabi official song Right Where I Am Supposed To Be, the Expo's anthem is a lush and dramatic number that attempts to capture the multicultural flavour of the event.

The track begins with Khaleeji percussion before making way for a steady dance beat in which synths and Middle Eastern strings intertwine.

The three singers perform two verses in English and Arabic each.

"Follow me, one voice, one family / The world as it stands, in the palm of our hands, it’s our time," Al Jassmi croons in a rare English verse.

Soul singer Almas follows up with: "Take a seat to the greatest show you’ll ever see / We’ve come so far but the future is ours to decide what we need.”

“Being a part of such an iconic event in the UAE’s history is extremely exciting and rewarding.”

Karaa, who is Berklee Abu Dhabi's artistic director and will be performing at the Expo's opening night concert, says the song aims to inspire people to dream big.

“Expo 2020 is a significant moment for the entire Arab world and Arabs around the rest of the world," she says.

"Through this song, I hope we can inspire people of all ages and from all walks of life to follow their dreams – the possibilities are endless.”