Tokyo Olympics will 'give humanity faith in the future':Bach | THE DAILY TRIBUNE | KINGDOM OF BAHRAIN 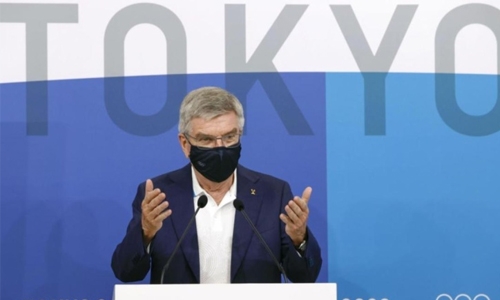 Tokyo Olympics will 'give humanity faith in the future':Bach

International Olympic Committee (IOC) chief Thomas Bach has named the Tokyo Games an important milestone for mankind amid the coronavirus pandemic and that cancellation was not an option, said dpa international.

"The Olympic Games Tokyo 2020 will give humanity faith in the future," Bach said Tuesday in the Japanese capital at the start of the 138th Session of the IOC.

The Tokyo Games, delayed by a year, are set to open on Friday despite wide-ranging coronavirus concerns, and Bach admitted he and the IOC were also unsure if they would be possible.

"We had doubts every day. We deliberated and discussed. There were sleepless nights. Like everyone else in the world, we did not know, I did not know, what the future would hold," Bach said.

The 67-year-old German said these doubts were not shared in order not to upset athletes and other stakeholders.

Bach insisted that "cancellation was never an option for us" because "the IOC never abandons the athletes."

“Our doubts could have become a self-fulfilling prophecy. The Olympic Games could have fallen to pieces. That is why we had to keep these doubts to ourselves.”

The IOC members held a minute of silence at the start of the meeting to honour the victims of the pandemic.

The Olympics stage is now set for the athletes "to shine and inspire the world."

Japan's Prime Minister Yoshihide Suga, who has been criticized domestically for his coronavirus policy, opened the IOC Session saying that "after a long tunnel an exit is now in our sight."

The significance of the Tokyo Games will not be "hampered or reduced" by the difficult circumstances, Suga said.

The prime minister said the health and safety of the Japanese people and the Olympic guests from overseas will be protected.

Tokyo's Governor Yuriko Koike also spoke at the meeting and said she wanted to make the Olympics and Paralympics a success.

The Tokyo region is under a state of coronavirus emergency for the duration of the Games which run until August 8.

Spectators won't be allowed to attend at most venues, and strict hygiene protocols apply to everyone involved.

There have been more than 70 positive tests within the Olympic bubble, including several athletes, and a majority of the Japanese people as opposed to the staging of the Games in the current conditions.

In decisions on Tuesday, ski-mountaineering was added to the programme of the 2026 Winter Games in Milan/Cortina d'Ampezzo, after making its Games debut at the 2020 Youth Olympics. Two events each for men and women and a mixed event are planned.

Former United Nations Secretary-General Ban Ki-Moon was re-elected chairman of the IOC ethics commission, and the Session officially nodded off a change of the Olympic motto of "faster, higher, stronger" by adding the word "together" to highlight solidarity.

The IOC Session runs until Wednesday when Australia's Brisbane is set to be elected host of the 2032 Olympics after being named the preferred candidate by the IOC executive board last month.

But IOC spokesman Mark Adams insisted that "it isn't a done deal" because "they (IOC members) could decide to put them back into the pot" among other interested parties" - a highly unlikely scenario though.