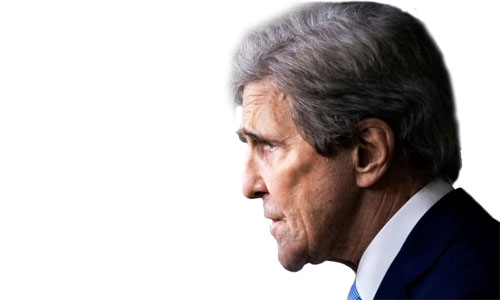 US climate envoy John Kerry said Tuesday island nations faced a situation "beyond existential" due to climate change, as he called for an end to fossil fuel subsidies and coal plant financing.

The 20 countries responsible for most of the world's emissions had a "special responsibility" to take action, Kerry said -- but warned they were not "moving in the same direction" or fast enough.

"When I talk to some of the island state leaders they are not just considering adaptation and resilience, they are considering where they are going to move to," Kerry told a virtual seminar during the Manila-based Asian Development Bank's annual meeting.

Kerry, the former secretary of state who has become President Joe Biden's globe-trotting climate envoy, said "adequate finance" was critical for achieving the goal of checking warming at 1.5 degrees Celsius (2.7 degrees Fahrenheit) above pre-industrial times -- the aspiration set in the Paris Agreement to avoid the most severe effects of climate change.

But he said nations were moving too slowly.

"We all know what we have to get done here. I hate to say it but we are sort of inching along, we are not actually getting it done," he warned.

"Emissions are going up, we are on the wrong track -- people are building back from Covid as if there were no reason to be thinking differently."

Kerry's remarks came less than two weeks after Biden doubled US ambitions for cutting greenhouse gas emissions, putting the country back at the forefront on climate.

As the market for coal, oil and gas rebounds this year, he warned more than 80 percent of the expected growth in coal demand would be from Asia.

"Without decarbonising energy systems the goals of the Paris Agreement will be beyond reach," he said.