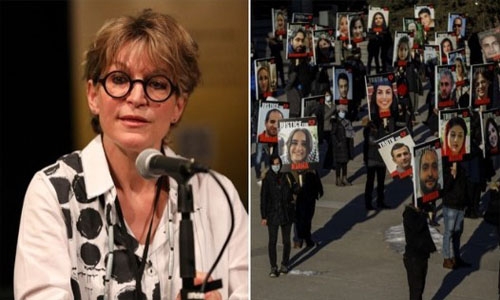 UN special rapporteur Agnes Callamard said Tuesday international experts will push for Iran to provide proper answers on questions surrounding the attack on Ukrainian Airlines flight PS752 and the death of 176 passengers on board.

She said that Iran bears the sole responsibility for investigating the truth surrounding the downing of the plane and for providing accountability.

PS752 was a passenger flight departing from Tehran for the Ukrainian capital Kiev, which was shot down shortly after takeoff by the Iranian Islamic Revolutionary Guards Corp (IRGC) on Jan. 8, 2020.

“So far, the investigation Iran has conducted has been an incomplete, if not frankly intentionally problematic, investigation and report and that’s unacceptable,” she said.

The investigation had been carried out in violation of victims’ families rights, she added.

“The full responsibility resides with the state of Iran, from the military to the civilian, to conduct an investigation in good faith and provide answers on how Iran handled the situation, how it failed to take precautions. We have not seen that happen yet,” Callamard said. “What happened instead is the Iranian authorities scapegoating a couple of individuals, like the three crew members.”

She also said the families of victims had been left with no answers, which they deserved, and were seeking truth and accountability more than financial reparations.

“The first line of responsibility resides with those who refused to close the air space. So far we don’t know who they are.

“Who presided over the decision to keep the information (that the flight was attacked) secret for three days? That is an extremely grave violation of the right to life. Who decided to bulldozer the crime scene? That is also a violation of basic standards of investigation. It is certainly not limited to the three members of the crew,” she said.

The most troubling element of the investigation, Callamard said, was that the explanations and justifications provided by the Iranians to account for what they termed as “non intentional error” did not add up.

“Their explanations are full of contradictions — they are contradicted by the facts, by expert investigations. Why provide explanations that don’t hold up to the truth?

“My instinct is that the Iranians want to hide something much more grave. Otherwise why not say clearly what happened?”

Even though international law has provision for errors that are committed “unintentionally”, Callamard said this did not apply in the case of Iran, and does not constitute a defense for Iran.