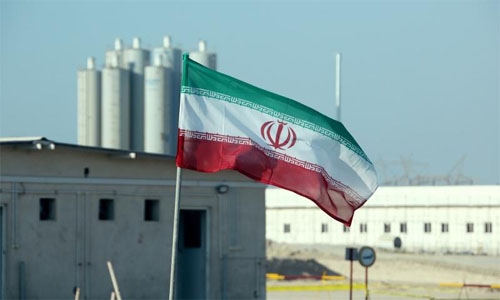 The UN’s atomic watchdog IAEA said yesterday Iran has produced 17.6 kg of uranium enriched to up to 20 percent, a step away from producing weapons-grade levels.

The International Atomic Energy Agency (IAEA) reported in a confidential document distributed to member countries and seen by international news agencies AP, AFP and Reuters that as of February 16, Tehran had added 17.6 kilograms of uranium enriched to 20 per cent to its stockpile.

Overall, it increased its stockpile of enriched uranium to 2,967.8 kilograms, up from 2,442.9 kilograms reported on November 2.

The nuclear deal signed in 2015 with the US, Germany, France, Britain, China and Russia, known as the Joint Comprehensive Plan of Action, or JCPOA, allows Iran only to keep a stockpile of 202.8 kilograms.

It also allows enrichment only up to 3.67 per cent.

This translates to Iran’s stockpile of enriched uranium is more than 14 times over the limit set down in its 2015 nuclear deal.

The new IAEA report comes as Washington and Tehran are locked in a standoff over reviving nuclear talks.

US President Joe Biden’s administration has signalled to Iran its willingness to return to talks to revive the nuclear deal Former President Donald Trump abandoned in 2018.

Biden reversed Trump’s determination that all UN sanctions against Iran had been restored.

The State Department eased stringent restrictions on the domestic travel of Iranian diplomats in New York.

Yet, Tehran demanded that all Trump-era sanctions on Iran be lifted before taking any real action to return to the deal.

Supreme Leader Ayatollah Ali Khamenei said on Monday Iran might enrich uranium up to 60 per cent purity if needed, while repeating a denial of any Iranian intent to seek nuclear weapons, for which 90 per cent enrichment would be required.

Iran also decided to restrict site inspections by the UN’s nuclear watchdog after a US refusal to lift existing sanctions.

Britain, France and Germany condemned on Tuesday the Iranian decision and said: “We urge Iran to stop and reverse all measures that reduce transparency and to ensure full and timely cooperation with the IAEA.”