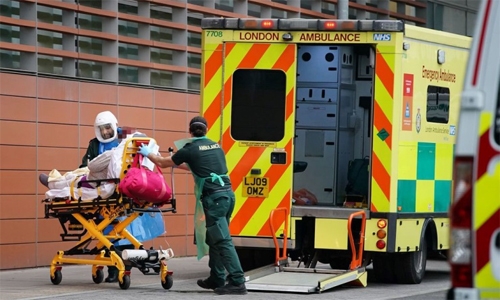 Chris Whitty, the chief medical adviser to the British government, issued a stark warning to the country about the situation hospitals face as case numbers continue to soar.

"If the virus continues on this trajectory, hospitals will be in real difficulties, and soon. The time people wait for care will continue to increase to potentially unsafe levels," Whitty wrote in an editorial for the Sunday Times newspaper, Deutsche press agency (dpa) reported.

Such levels could be reached in less than three weeks' time, he wrote. "The time people wait for care will continue to increase to potentially unsafe levels."

"Hospitals are always busy in winter, but the NHS in some parts of the country is currently facing the most dangerous situation anyone can remember," he said.

His comments come as rising numbers of patients are admitted to intensive care.

"Hospitals will not have room to take redirected emergency cases in regional networks. staff-to-patient ratios — already stretched — will become unacceptable even in intensive care," Whitty said.

"There will be avoidable deaths," Whitty said and appealed to people to follow the guidelines to prevent the virus from spreading and avoid unnecessary interactions that could lead to further cases.

Case numbers are particularly high in London, where Mayor Sadiq Khan has declared a "major incident," as hospitals are already at their limits.

The number of new infections per week per 100,000 inhabitants, the seven-day incidence, in London is now more than 1,000.

A further 1,035 people had died within 28 days of testing positive for Covid-19 as of Saturday, the government announced, bringing the national total death toll to 80,868. Many say the true number is higher, however.

In light of the situation, the pace of the vaccination campaign is to be sped up significantly, with a goal of offering it to 15 million Britons who are particularly at risk the first jab by mid-February.

To achieve this, the military has been called in, and Prime Minister Boris Johnson says military strategies will be used.

So far, almost 2 million people have received the coronavirus vaccination, according to the government, with Health Minister Matt Hancock saying 200,000 people were being vaccinated daily.

In addition, mass rapid testing of people without symptoms will be used to break chains of infection. To this purpose, 2 million antigen tests will be made available from Friday.