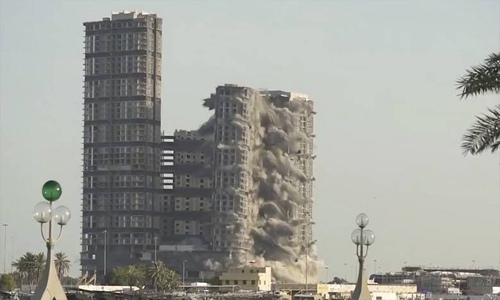 Meena Plaza Towers has been declared the world's 'tallest building to be demolished using explosives' (controlled demolition). Modon Properties, which carried out the project, set a new Guinness World Record with the safe and successful demolition on Friday.

Comprising four high-rise structures, a total of 144 floors were demolished in 10 seconds, with stable non-primary explosives placed in 18,000 drill holes within the structures.

Danny Hickson, official Guinness World Record adjudicator, said demolishing a structure of such scale required a high level of expertise held only by a few.

"It's a pleasure to witness this controlled demolition and verify it as the largest of its kind. This monumental achievement promotes a new beginning for the Abu Dhabi skyline, making room for new vibrant developments and designs," Hickson said.

Lauding the team who worked hard on the project: Bill O'Regan, CEO of Modon Properties, said: "We are really proud and excited about making it to the Guinness World Records. The demolition work was a collective effort of all the teams, including government departments and all other partners."

Ahmed Al Shaikh Al Zaabi, director of delivery at Modon, said: "This historic milestone for Abu Dhabi reaffirms the Capital's ability to execute mega projects safely. We are privileged to be appointed as one of the developers tasked to transform key areas of Mina Zayed and delighted to play a vital role in the redevelopment of such an iconic area etched in history.

"This marks a significant step towards the progress of the Mina Zayed community. It also demonstrates the determination of our team and stakeholders to drive this project forward and deliver on the vision of our wise leadership to develop the nation's capital and position it as one of the most appealing destinations in the world."