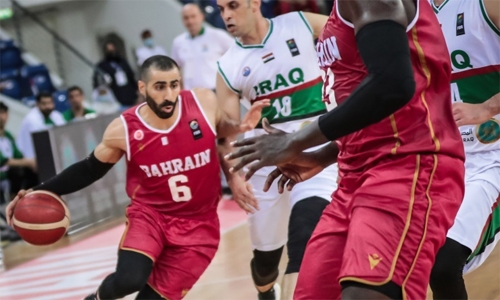 Bahrain needed overtime and some late Mohammed Hussain heroics to overcome Iraq last night, while Lebanon and the Philippines registered lopsided victories to get the FIBA Asia Cup 2021 qualifiers in the Kingdom underway.

The host Bahrainis appeared to be on a roll to a much-needed win, before their rivals fought back and forced overtime, before doing enough to come away with a hard-earned 95-92 victory.

Lebanon got their weekend off to a strong start with a crushing 115-60 victory over India and the Philippines followed suit, making easy work of Thailand in a 93-61 win.

All three games were played at the Khalifa Sports City arena in Um Al Hassam.

In Bahrain’s triumph, the hosts took a lead as big as 16 early on, but then allowed their opponents to get back into the contest. The Iraqis were then able to force overtime after tying the game at 78-apiece with a Demario Mayfield three-pointer with almost no time remaining.

In the extra five-minute session, Hussain came up big for the home team. He first made a go-ahead three-pointer with just under two minutes left for an 88-86 edge, and then sank a pair of pressure packed charity shots with 26 seconds remaining to make it 93-88 and virtually ice the game.

Hussain poured in 30 points, including an impressive seven three-pointers, to lead the Bahrainis in the gutsy win. Mohammed Kuwayed added 16, while Muzamil Ameer scored 13. Naturalised big man CJ Giles chipped in with 12 points and 11 rebounds before fouling out.

Mayfield had 26 to pace Iraq, while Ali Ismael contributed 17 in the loss.

For Lebanon, they dominated each quarter against India and enjoyed leads as big as their final 55-point margin of victory. The Lebanese bench outscored their rival subs by 40, 59-19, to give plenty of support for their starting quintet.

Wael Arakji top scored for the winners with 20 points including four three-pointers, while Aziz Abdel Massih came off the bench and contributed 17. India were led by the 25 markers of Amjyot Singh Gill, but he received little help from elsewhere as Sahaji Pratap Singh Sekhon was their only other player in double-figures with 10.

Meanwhile, the Filipinos used a strong second quarter against their Thai counterparts, whom they outscored 31-10 to take control of the contest.

Dwight Ramos led all scorers with 20 for the Philippines while Justine Baltazar and Juan Gomez De Liano both contributed 12.

Both teams meet again on Monday, which will be the Philippines’ only other game in Bahrain.

Thailand takes on Indonesia today in the lone qualifying game in Bahrain. It is scheduled for a 4pm tip-off at the same venue.