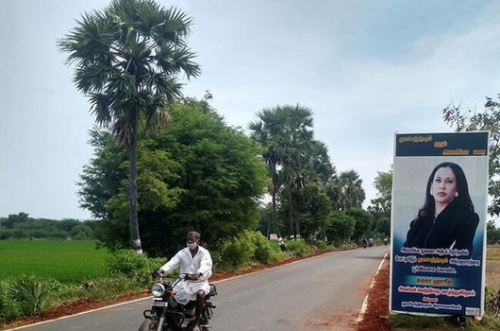 A big banner of U.S. vice presidential candidate Kamala Harris welcomes visitors to Thulasendrapuram, a lush, green south Indian village that is praying for her Democratic Party’s victory in the Nov. 3 presidential election.

The village, located about 320 km (200 miles) south of the city of Chennai, is where Harris’s maternal grandfather was born more than a century ago.

Its residents beam with pride at what the first U.S. senator of South Asian descent has already achieved, and many are rooting for an election result that will make her the second-most powerful person in the world’s richest country.

“From Thulasendrapuram to America”, declares one of the nearly dozen banners from where Harris smiles out in the village.

Harris’s grandfather P.V. Gopalan and his family migrated to Chennai nearly 90 years ago, where he retired as a high-ranking government official.

Harris, who was born to an Indian mother and a Jamaican father who both immigrated to the United States to study, visited Thulasendrapuram when she was just five and has repeatedly recalled her formative walks with her grandfather on the beaches of Chennai.

Gopalan’s childhood home in Thulasendrapuram does not exist anymore, villagers say, and cows and goats were seen grazing on empty plots of land where the house he grew up in once stood.

The banners, with messages written in Tamil, were put up on the directions of M. Gurunathan, the head of Thulasendrapuram’s village committee that oversees its more than 200 mostly farming families.

One banner at the village bus stop has Harris smiling with the White House in the background.

“We are really hoping she wins,” said Gurunathan, who is planning to hold a special prayer at the local temple on election day. “The village has received global fame because of her. She is our pride.”

Locals of neighbouring areas are also in touch with the temple to conduct an “abhishekam” - which sometimes involves pouring milk over the idol of a Hindu god - to pray for Harris’s victory.

Harris’s name is seen sculpted into a stone that lists public donations made to the temple, along with that of her grandfather who had donated decades ago. Her aunt offered 5,000 rupees ($67) in her name after she was appointed the attorney general of California, the temple’s caretaker, S.V. Ramanan, said.

“But I think she is not proud of her Hindu roots, she identifies herself as a Christian,” Ramanan said.

“Though she has reconnected with her Indian connection on the campaign trail, she has mostly played up her image as an American.”

Harris has been widely described as a church-goer and a person of Christian faith and was raised in a household that was tolerant of both Hindu and Christian religious practices. The democratic vice-president nominee has previously acknowledged her Indian roots.