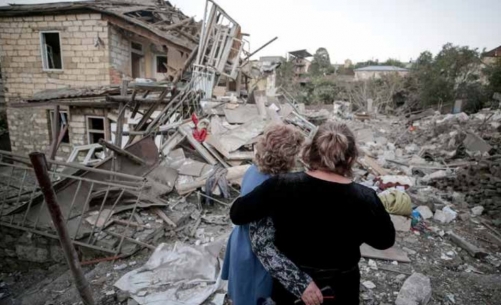 On September 27, 2020, the armed forces of Armenia launched a new act of aggression against Azerbaijan by attacking military positions of Azerbaijan and densely populated residential areas along the entire perimeter of the front line. In order to prevent another military aggression by Armenia and provide the security of densely populated civilian residential areas the Armed Forces of the Republic of Azerbaijan undertook counter-offensive measures within the right of self-defense and in full compliance with international law.

Armenia’s deliberate targeting of civiliaArmenia’s deliberate targeting of civilians and civilian infrastructure is by no means an isolated case. Since the early 1990s, Armenia’s aggression against Azerbaijan has been accompanied by serious violations of human rights and humanitarian law with respect to Azerbaijani civilians. Ethnic cleansing against all Azerbaijani population of the occupied territories is one of the egregious war crimes committed by Armenia.

Close to one million Azerbaijan IDPs remain deprived of their basic human rights. The cultural heritage of Azerbaijani people and 63 of 67 mosques on the territory of today’s Armenia has been demolished and plundered. Armenia also destroyed all Azerbaijani historical and religious monuments in the occupied territories.

The new act of aggression by Armenia against Azerbaijan is the continuation of its provocations in political, military, economic, and other domains, on July 12-16, 2020, the Armenian leadership carried out an attack on Azerbaijan’s military positions and residential areas in the Tovuz district at the Armenia-Azerbaijan state border. During five consecutive days, the armed units of Armenian subjected military positions and civilian infrastructure to intensive fire from heavy artillery in the area far from the conflict zone at the state border of the two countries. The aims of Armenia in this attack were to introduce a new dimension to the conflict and thus, find a pretext for the involvement of the CSTO into the conflict by provoking Azerbaijan for striking back the territory of Armenia, to spread panic among the Azerbaijani public and invade a new part of Azerbaijan.

Armenia also aimed at treating critical energy transportation lines running through the region, which is also of high importance for the European nations, and thus, risking the commencement of the Southern Gas Corridor. Armed forces of Azerbaijan, despite Armenia’s provocations, limited its actions to only responding to Armenia’s attack, and restored control over the situation.

The leadership of Azerbaijan has extensively brought the attention of the international community to these actions of Armenia and revealed that Armenia did not want peace, instead of exploited the peace process for continuation of its occupation of territories of Azerbaijan and securing their annexation. Having observed Armenia’s preparation for a new attack, the leadership of Azerbaijan had no question about the real intention of Armenia. Nikol Pashinyan’s provocative “Karabakh is Armenia and period” statement, “new war for new territories” concept put forward by Armenia, as well as so-called “seven conditions” for the resumption of negotiations have finally rendered negotiations meaningless.

In this war, Armenia extensively uses terrorists and mercenaries against Azerbaijan. According to various estimations, currently, thousands of mercenaries and terrorists from the Middle East and CIS countries have already been deployed to the conflict zone by Armenia. Despite the ongoing pandemic, a significant increase is being observed in flights from these countries to Armenia. This includes both regular flights to Armenia, as well as from those places where there have never been flights to Armenia.

Mercenaries and terrorists are brought to Armenia via these flights and they are deployed to the occupied territories of Azerbaijan in order to fight against Azerbaijan and organize terrorist activities against Azerbaijani civilians. Nagorno-Karabakh was made an autonomous region within Azerbaijan by the Soviet Union in the 1920s. During the dissolution of the Soviet Union in 1991, this autonomous region declared so-called independence that is not recognized by any country including Armenia but recognized as a part of Azerbaijan by the entire international community.

In the intervening decades, the one constant has been the Armenian occupation of almost all of Azerbaijan’s autonomous territory of Nagorno-Karabakh and seven surrounding regions of Azerbaijan that together form about 20 percent of the country’s total territory. It is not the issue of dispute that these lands are occupied illegally and they must be returned: four UN Security Council resolutions and various OSCE documents directly related to the conflict make this clear, as do the formal positions of all the major powers, not to mention the rest of the world.

The mediators – the co-chairs of the OSCE Minsk Group (Russia, France, and the United States) – are at fault: there was a formal negotiation process that was launched in 1992, which had essentially produced no concrete results on the ground, in the sense that the occupation of Nagorno-Karabakh and the seven surrounding regions of the Republic of Azerbaijan has not come to an end, Azerbaijani refugees and IDPs have been prevented from exercising their right of return, and so on.

In other words, for nearly three decades the Minsk Group led negotiations whose objectives were clearly and unambiguously set down on paper. The Co-chairs gave themselves the responsibility to lead a defined process to achieve a defined result, and yet the conflict has remained frozen since a 1994 ceasefire was put into effect: none of the Minsk Group’s defined objectives have been achieved – not even close. On October 9, Russia called the parties to cease hostiles for humanitarian purposes. Following the call of President of Russia Vladimir Putin, an agreement of humanitarian ceasefire was reached in Moscow at the meeting of the foreign minister of Russia, Azerbaijan, and Armenia with the mediation of the Russian Federation.

The purpose of the ceasefire was to exchange the dead bodies and prisoners of war. At the meeting, it was also agreed to immediately start substantive negotiations under the mediation of the co-chairs of the OSCE Minsk Group. Only 15 minutes after the ceasefire entered into force on October 10, at 12:00 Armenia continued its attacks on Azerbaijani positions. At the night of October 11, Armenia launched a missile attack on city Ganja, the second most populated city of Azerbaijan. As result, 10 civilians were killed more than 30 were seriously wounded.

Extensive damage was inflicted upon civilian infrastructure. The occupying Armenian armed forces, in violation of the norms and principles of international law, the Geneva Conventions of 1949 and their Additional Protocols, as well as the requirements of the humanitarian ceasefire agreed after its own persistent requests in Moscow, continues to deliberately target residential settlements in Azerbaijan with heavy artillery fire. On October 15, the armed forces of Armenia, grossly violating the humanitarian ceasefire regime, continue to shell the territories of Tartar district with heavy artillery, Armenians once again targeted civilians.

The Armenian army fired on the graveyard in the territory of Tartar district during the funeral using heavy artillery. As a result of this act of vandalism, four civilians killed, and five wounded. On the night of 17 October 2020, the armed forces of Armenia attacked the Ganja city of Azerbaijan with ballistic missiles. This, third in a row atrocious attack on the second biggest city of Azerbaijan, since the new aggression of Armenia against Azerbaijan, situated far away from the frontline caused serious civilian casualties; 12 civilians, including 2 minors killed, more than 40 people injured.

Armenia’s deliberate and indiscriminate targeting of civilians, in a blatant violation of norms and principles of international law, including international humanitarian law, as well as declared humanitarian ceasefire, the purposeful killing of peaceful people constitute a war crime and a crime against humanity and the leadership of Armenia bears full responsibility for this crime.

The bombing of the Ganja, the city with a population of more than 500,000 people situated far from the conflict zone, without any military necessity by the Armenian political-military leadership, the deliberate and indiscriminate use of powerful destructive missiles such as SCUDs to kill innocent civilians will be included in the history books as the bloodiest war crime committed against humanity in the 21st century. Armenian armed forces subjected to missile attacks the densely populated civilian areas in Ganja, Mingachevir, Barda, Beylagan, Tartar, and some other cities of Azerbaijan. As a result of Armenia’s artillery and missile attacks, more than 60 Azerbaijani civilians were killed, more than 290 injured, more than 2000 residential buildings and civilian objects destroyed (from 27 September to 19 October 2020).