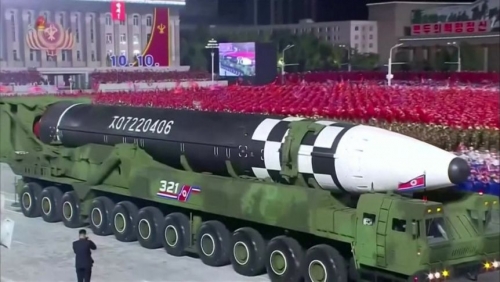 During the parade, the communist country also showed off a new type of submarine-launched ballistic missile (SLBM), which it labeled as the Pukguksong-4, according to footage from the North's state Korean Central Television, according to South Korean News Agency (Yonhap).

The new ICBM was carried on a transporter erector launcher (TEL) with 22 wheels, indicating that it is longer than the Hwasong-15, which is carried by a 18-wheel TEL. A longer missile is believed to be capable of flying further, according to officials and experts.

The Hwasong-15 has an estimated range of 8,000 miles, or 12,874 kilometers, which is capable of striking any part of the continental U.S.

The regime has two more types of ICBM: the Hwasong-13 that can fly as far as 5,500 km, and the Hwasong-14 missile with an estimated range of 10,058 km, which is capable of reaching most of the continental U.S.

But the new ICBM does not appear to carry multiple warheads, which the North has been working to develop, given that its front part is relatively sharp, according to the experts. In order to contain multiple warheads, it needs to be more round.

"More analysis is needed to learn the exact features of the newly disclosed ICBM.

It could be called either the upgraded version of the Hwasong-15, or the Hwasong-16," a Joint Chiefs of Staff (JCS) officer said.

North Korea had been widely expected to roll out the "new strategic weapons," such as an ICBM or an SLBM, that leader Kim Jong-un pledged to show off in his New Year's Day message, amid stalled denuclearization talks with the United States.