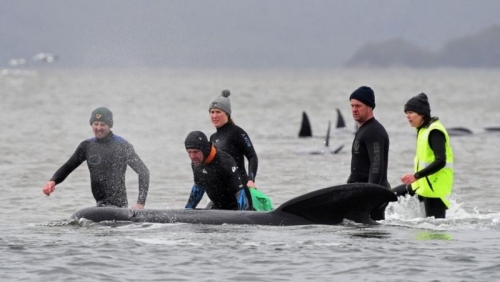 world September 26, 2020
Tasmania
They believe Macquarie Harbour on Tasmania's west coast is now clear of live whales. But about 350 whales died in what is Australia's worst stranding on record. Now, attention has turned to disposal of the carcasses, with 15 buried at sea on Friday in a trial to test the success of that method.
A statement released by the Tasmanian government on Saturday confirmed that 108 long-finned pilot whales that had survived the stranding had been released outside the heads at Macquarie Harbour.
Marine Conservation Program wildlife biologist Dr. Kris Carlyon called it a fantastic outcome after five days of hard work by the rescue team.
"We only had one whale restrained overnight, which is a good result given 20 whales were released yesterday," Dr. Carlyon said.
At least four whales had to be euthanized earlier in the week as they were too exhausted to be saved.
Efforts are now being made to remove the carcasses from the harbour. This would take a number of days and depend on wind, tide, and other conditions said the government statement.