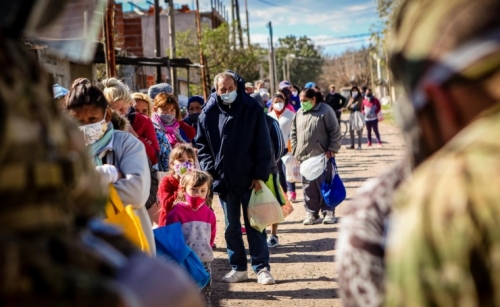 A report by the Bill and Melinda Gates Foundation, published on Tuesday, shows that, by nearly every indicator, the world has regressed in attempts to meet the United Nations Sustainable Development Goals to end poverty and reduce inequality.

Extreme poverty has increased by 7 percent due to the outbreak, according to the foundation's annual "Goalkeepers" report, Deutsche press agency (DPA) reported.

Vaccine coverage - a proxy measure for how health systems are functioning - has plummeted to levels last seen in the 1990s, "setting the world back about 25 years in 25 weeks," the report says.

The data also show that the economic fallout from the pandemic is reinforcing inequalities, with women, racial and ethnic minority communities, and people living in extreme poverty hit particularly hard.

In the report, which Bill and Melinda Gates have co-authored every year since 2017, they call for: global collaboration on the development of diagnostics, vaccines, and treatments; swift manufacturing of tests and doses; and the equitable delivery of those tools based on need rather than the ability to pay.