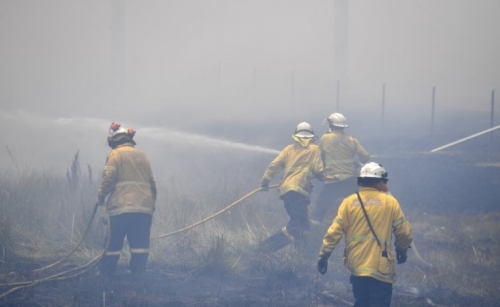 An ambitious plan that aims to monitor and extinguish dangerous bushfires within an hour, anywhere in Australia, by 2025 using drones, satellite technology, and machine learning was launched in Canberra on Tuesday.

The blueprint for the so-called "Fire Shield Mission" was outlined by the philanthropic Minderoo Foundation alongside Australia's Science and Technology Minister Karen Andrews.

The plan, which the group has dubbed Australia's "bushfire moon shot" will rely on the latest remote-sensing technology to rapidly detect and respond to bushfires, according to Deutsche press agency (DPA).

"We know that every minute saved in detecting a fire improves the effectiveness of the response and reduces the fire's destructive potential – so there is a huge opportunity to apply new technologies to this challenge," project lead Adrian Turner said in a statement.

Under the plan, artificial intelligence and machine learning will be used to pinpoint dangerous blazes, and drones and autonomous vehicles will help to extinguish them.

"This important work has the potential to be a genuine game-changer for Australia. It highlights the power of collaboration and what can be achieved through a bold vision," Andrews said.

The foundation has worked with more than 50 partners across the community, emergency services, industry, government, and research sectors to co-create and begin implementation of the blueprint.

So far the foundation has committed A$50 million ($37 million) to the program and aims to attract cash and in-kind funding of about $500 million.

The devastating 2019-20 bushfires in Australia killed 33 people, destroyed over 3,000 homes, and scorched over 17 million hectares of land.