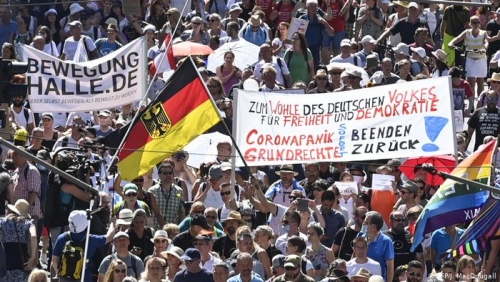 Thousands marched in Berlin yesterday to protest against measures imposed in Germany to stem the coronavirus pandemic, saying they violated peo- ple’s rights and freedoms.

The gathering, estimated by police at 17,000, included libertarians, constitutional loyalists and antivaccination activists. There was also a small farright presence with some marchers carrying Germany’s black, white and red imperial flag.

Protesters danced and sang ‘We are free people!’ to the tune of rock band Queen’s ‘We Will Rock You’. Others marched with placards saying ‘We are making a noise because you are stealing our freedom!’ and ‘Do think! Don’t wear a mask!’.

“Our demand is to return to democracy,” said one pro- tester who declined to give his name. “The mask that enslaves us must go.”

The protests followed a rallying call from Michael Ballweg, an entrepreneur and political outsider who has organised similar rallies in Stuttgart and is running to become mayor of the southwestern city.