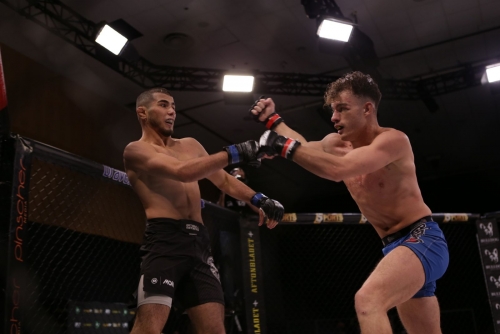 The world of MMA stood still for 15 minutes as the biggest prospect in the sport took his first steps in the professional scene with a successful and dominant performance.

The pound-for-pound num- ber one amateur fighter in the world Muhammad Mokaev did more of the same on his pro debut and dominated Glenn McVeigh en route to a unani- mous decision victory at BRAVE CF 37, the first-ever show of the fastest-growing MMA organiza- tion in Sweden.

For his part, McVeigh hung tough and showed he belonged in the cage, having a good per- formance in the first round and impressing with his submission defense in the second and third rounds. However, the short-no- tice debutant had too much on his hands and wasn’t able to stop Mokaev’s takedowns and great striking offense.

Both men hyped up the fight in the last few days as McVeigh tagged BRAVE CF president al- most imploring for the fight and saying he could “smash the bum Mokaev”. The two-time amateur world champion didn’t like the words and promised to make him pay.

They were close to starting fighting twice before actual fight night, in an impromptu meeting in the host hotel lobby, and then in the post-weigh-ins staredowns. Inside the BRAVE CF Arena, they kept the trash talk on high volume, and the lack of fans made for great view- ing as fans at home were treated to their exchanges - with the referee having to ask both men

to “watch their words” at one point.

After the bout, Mokaev said their beef was squashed but admitted he still had a prob- lem with McVeigh giving him a finger in a pre-fight post on social media. “The Pun- isher” also asked for a fight in Poland, where BRAVE CF makes its debut on Septem- ber 5th. Now with a 1-0 pro record, the sky is the limit for Mokaev.