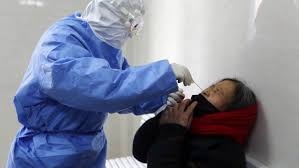 2,641 new cases of confirmed infections were reported through Friday, February 14.

The death toll from the novel coronavirus outbreak in China has risen to 1,523, while the number of confirmed cases has reached 66,492, the country's National Health Commission announced on Saturday, February 15.

2,641 new cases of confirmed infections were reported through Friday, while 1,373 patients were released from hospitals through the day after being cured, the Health Commission said.

As many as 139 people died on Friday in Hubei province-the epicenter of the outbreak which reported the first case of the new strain of coronavirus in December, last year. The virus has since then spread to several countries across the world, including India.

"As of 24:00 on Feb 14, the National Health Commission had received 66,492 reports of confirmed cases and 1,523 deaths in 31 provincial-level regions on the Chinese mainland and the Xinjiang Production and Construction Corps, and in all 8,096 patients had been cured and discharged from hospital," a statement by the Health Commission read.

"There still remained 56,873 confirmed cases (including 11,053 in serious condition) and 8,969 suspected cases. So far, 513,183 people have been identified as having had close contact with infected patients. 169,039 are now under medical observation," it added.