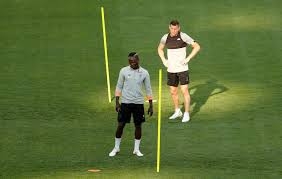 Liverpool winger Sadio Mane and midfielder James Milner are back in contention for the Premier League leaders after the pair recovered from injuries that had sidelined them in recent games, manager Juergen Klopp said yesterday.

Mane was forced off with an injury in Liverpool’s 2-1 win over Wolverhampton Wanderers on Jan. 23 while Milner has missed the last seven games in all competitions due to a muscle injury. “Millie (Milner) and Sadio are back.

When they are back you start thinking (about starting them) immediately. I hope it stays like this,” Klopp told reporters ahead of Saturday’s trip to bottom side Norwich City. “Apart from (Xherdan) Shaqiri, (Nathaniel) Clyne and (Paul) Glatzel, all the players are in training. We have some good options, hopefully it stays like this, it would be great for the decisive part of the season.” Klopp also said that they had not made any decision on whether forward Mohamed Salah would compete for Egypt at the Olympics as one of their senior players.

Egypt ’s Olympic coach Shawky Gharib told Reuters on Wednesday that Salah’s participation at the Tokyo Games later this year would depend on the forward and Klopp, but the German boss said he did not have any details to make a decision. “We cannot discuss it as we don’t know too much yet,” Klopp said. “We will speak and we will see.

Do I want to lose a player in the pre-season? No, of course not. “Nobody contacted us so far. It’s an Olympic Games. I’m a sports person... We have to see how we can deal with it.” Norwich lost 4-1 at Anfield on the opening day of the season but Liverpool were under pressure in the second half when the visitors threatened to wrest back control of the game as the promoted side created numerous chances. However, Klopp said that Liverpool were still rusty at the start of the campaign and that it was no longer the case.