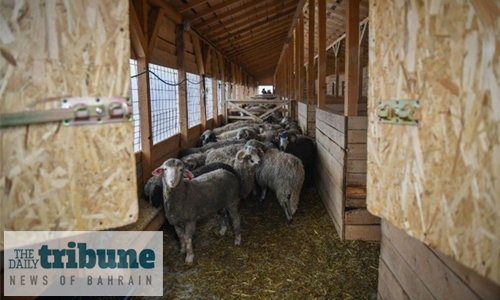 The 180 sheep rescued from a cargo ship that capsized carrying 14,600 animals are staying in a shelter in Romania as they wait to be moved to sanctuaries or adopted, an activist group said Wednesday. The sheep will spend the winter in a modern barn at a refuge in Peris, a rural town some 30 kilometres (19 miles) from the capital Bucharest.

“They were born a second time,” Kuki Barbuceanu, head of Animal Rescue and Care (ARCA), the group which led the rescue operations, said. The Palau-flagged Queen Hind cargo vessel overturned with 14,600 sheep aboard in the Black Sea in late November for as yet unknown reasons shortly after leaving the port of Midia in southeast Romania.

The 21 crew members were all rescued, but only 180 sheep could be saved from the Saudi Arabia-bound vessel. Barbuceanu said the sheep trapped inside the ship that didn’t drown or were crushed to death died of thirst during the days when rescuers couldn’t reach them. Those that survived are largely healthy though some of them cough and others have suffered sprains.

“They will not be sacrificed and can take it easy until the end of their life, 12 to 15 years, because they deserve it,” Barbuceanu said. In spring, the sheep will be able to graze in the field surrounding the refuge that hosts them, together with five horses, two donkeys and several dogs and cats. As soon as the issue of ownership is resolved, some will be transferred to sanctuaries or given up for adoption.

Many Romanians, moved by the fate of the sheep, have donated money, including for their current upkeep, which amounts to 5,000 euros ($5,600) per month, including the rent for the refuge. Nearly three months after the sinking, the freighter still lies on its side, a few hundred metres from the quay, while the carcasses have still not been removed.

But the authorities announced Wednesday that the port administration has awarded a tender launched in December to recover the vessel and burn the corpses. Barbuceanu hopes that the disaster will have a long-term impact and convince Brussels to ban the transport of livestock.

Romania is the third-biggest producer of sheep in the European Union and has exported millions in the past two years, in particular to Jordan and Libya. Animal rights groups have already criticised the conditions under which such shipments take place, especially during hot summer months.