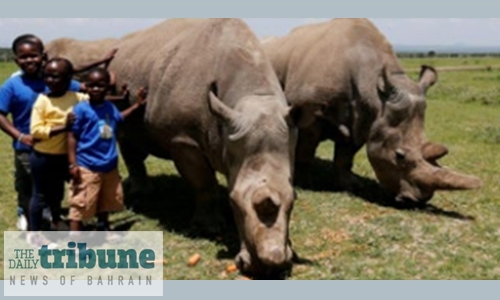 Scientists working to save the northern white rhinoceros from extinction plan to implant its artificially developed embryos in another, more abundant rhino subspecies in Kenya later this year, researchers and government officials said on Wednesday.

The northern white rhino came closer to extinction in 2018 when the last known living male died in Kenya’s Ol Pejeta Conservancy. The only surviving northern white rhinos now are a mother and daughter, which also live at the site, making them the world’s most endangered mammal.

Researchers collected sperm from male rhinos before their deaths and developed three embryos using eggs collected from the two living females last year. They plan to implant the embryos in female southern white rhinos, which are more populous. “Despite the fact that more research is still needed, the team expects that a first attempt for this crucial, never before achieved step, may be undertaken in 2020,” Ol Pejeta Conservancy said in a statement.

In addition to Ol Pejeta, the team behind the effort includes Kenya Wildlife Services, Italian-based Avantea Lab, which has the embryos in its custody, Dvur Králové Zoo in the Czech Republic, and German-based Leibniz Institute for Zoo & Wildlife Research.