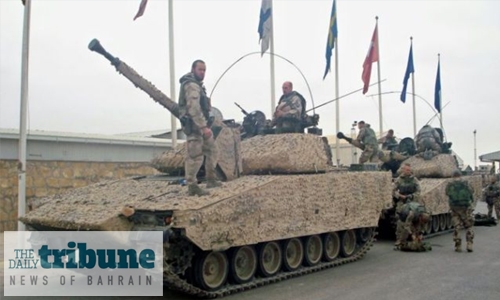 A Swedish man who got a job in the military using forged credentials was promoted to work as staff officer at NATO’s HQ and served in a UN mission, the military and media said yesterday.

The man lied about his experience and forged a diploma from the officers’ academy, according to the Dagens Nyheter newspaper. He served in the Swedish Armed Forces for more than a decade and completed postings to high-security positions and international missions, including Afghanistan and last year to the UN peacekeeping force MINUSMA in Mali.

The Swedish Armed Forces conceded that the man had been “wrongfully employed” and confirmed in a statement he had served at NATO’s Supreme Headquarters Allied Powers Europe (SHAPE) in Belgium. “The person worked as a Swedish liaison officer and with an IT system used within the framework of those military operations where the Swedish Armed Forces has personnel,” the statement said.

The military added that NATO had been informed on Monday. Dagens Nyheter reported that he worked on the Afghanistan Mission Network -- a now-defunct system used by 48 nations for sharing intelligence, surveillance and reconnaissance information -- during 2012 and 2013 at NATO’s HQ.

He rose to the rank of major despite not having completed mandatory training, and was even temporarily promoted to be able to serve at the military alliance headquarters, the newspaper said. Following reports about the officer on Monday, the Swedish military said it had started an investigation.