‘This is not over’: Hong Kong protesters return to the streets | THE DAILY TRIBUNE | KINGDOM OF BAHRAIN 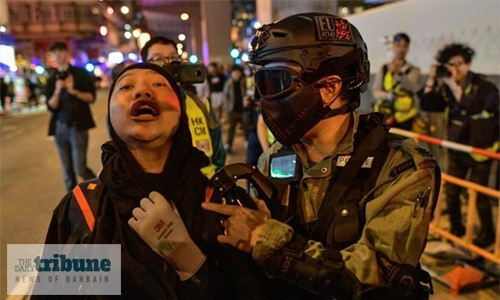 ‘This is not over’: Hong Kong protesters return to the streets

Protesters returned to the streets of Hong Kong yesterday, ending a brief election lull and demanding the government make concessions a week after pro-democracy candidates won a landslide victory.

Rallies follow skirmishes overnight between police and protesters, with tear gas fired for the first time since the November 24 district council vote and a man assaulted as he tried to clear a protester barricade. Hong Kongers have rallied in huge numbers over the last six months, fuelled by years of growing fears that authoritarian China is stamping out the city’s liberties.

The territory’s Beijing-backed leaders have offered few concessions and police have cracked down hard on protesters in increasingly violent confrontations. At one of yesterday’s rallies -- a gathering to thank US lawmakers for their support -- protesters said they were determined to keep up the pressure on local authorities after the election victory.

“I would like to send a message to the government: we are not done and this is not over,” said one 27-year-old protester, who declined to give his name. He said he hoped that Sunday’s demonstrations, all three of which received permits called “letters of no objection,” would stay peaceful.

“I do worry that public opinion may change if violence and clashes continue,” he said. But he said he feared the movement would “simply wither if we adopt a completely peaceful manner.”

Bolivia’s women wrestlers back in the ring

Australian freed by Taliban believes US made multiple rescue attempts