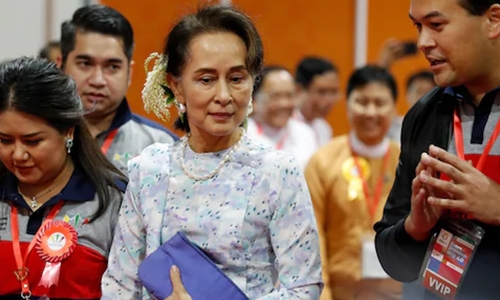 Myanmar’s civilian leader and Nobel peace laureate Aung San Suu Kyi will head up a delegation to the UN’s top court to defend a case accusing the mainly Buddhist country of genocide against Rohingya Muslims, the government said Wednesday, a decision that blind-sided observers.

West African nation Gambia is due to open its case before the International Court of Justice (ICJ) in December on behalf of the 57 member states of the Organisation of Islamic Cooperation. The complaint accuses Myanmar of breaching the 1948 UN Genocide Convention through its brutal military campaign in 2017, which targeted the Rohingya minority in Rakhine state.

In the opening hearings, the small, majority-Muslim African country is expected to ask the court to make an emergency injunction to protect the Rohingya, pending a decision on whether to deal with the wider case. But Ms Suu Kyi will personally lead a team to The Hague to “defend the national interest of Myanmar,” her office said.

IS claims attack in Egypt’s Sinai that killed officer