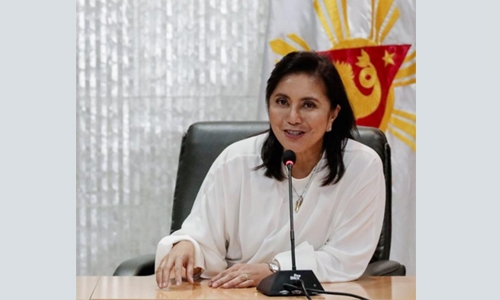 The opposition leader put in charge of Philippine President Rodrigo Duterte’s war on drugs said yesterday it was time to reassess a campaign that was fraught with senseless killings and had failed to curtail a staggering rise in addiction. Speaking at her first meeting in charge of a task force on narcotics, Vice President Leni Robredo said the strategy should be as much about public health as it was crime and justice, and police operations, known as “Oplan Tokhang”, must be conducted lawfully and based on evidence.

Robredo is a political rival of the popular Duterte and has long been a critic of his flagship campaign, arguing that thousands of urban poor have been killed, with no sign of progress towards dismantling major drugs networks. “There are many senseless killings that have accompanied Oplan Tokhang, it has reached a certain level of notoriety, that Tokhang is a war against the poor,” she said.

“It is incumbent upon us to change that thinking. It is probably time that we think about shifting to something that is effective and that no one is killed senselessly.” She added: “I am all for a evidence-based strategy and approach.” Human rights experts at home and abroad are incensed by thousands of deaths in what police say were sting operations that resulted in shootouts. Activists dispute those accounts and accuse police of executing suspects based on weak intelligence.

Police reject that. Robredo was given the “drugs tsar” post by Duterte after remarks she made about abusive police and the campaign’s ineffectiveness, made during an Oct. 23 interview with Reuters, and in subsequent media appearances. Her supporters are sceptical about the appointment by a president who has repeatedly snubbed and publicly ridiculed her. Duterte’s office says he genuinely wants Robredo to succeed.

On Friday, she said drug addiction was a real problem, noting Duterte’s own frustrations about what he says are up to 8 million drug-dependent Filipinos. Duterte has not disclosed the source of his numbers. Robredo said she interpreted Duterte’s offer as a sign of his openness to new ideas. “I want to look at it as a signal that the president is open to listen to fresh perspectives about the entire campaign,” she said. “I also want to look at it as agreement that it is time to objectively assess what we have been doing.”