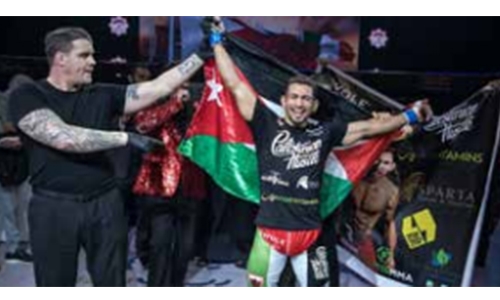 Abdul-Kareem Al-Selwady is on the road to recovery after losing his BRAVE CF Lightweight world title last April, in front of his home fans. To start a new chapter in his career, “The Pride of Palestine” decided to drop to Featherweight. He will take on Colombian star Dumar Roa at BRAVE CF 29, in Bahrain, on November 15th and is looking forward to a new experience in familiar ground. Al-Selwady has won each of the three fights he has taken in the Kingdom of Bahrain, including his title win against Lucas “Mineiro” at last year’s BRAVE CF 18.

Now, he’s looking to the support of his “second home” to get past the next challenge and start a new road to the world title, this time in a different weight class. “This is going to be the fourth year in a row that I fight in Bahrain. It’s like a good-luck charm, as I always do well here. I can’t wait to put on a show for the Bahraini people, because they have always been very supportive of me. I love it in Bahrain, I feel at home there and the fans really like me which is really cool.

I’ve fought three times before and I’ve always won here. Of course, the biggest moment of my career took place there when I won the BRAVE CF Lightweight title. Now, this is a new time and a new Al-Selwady. I can’t wait to show everyone there what I’m made of”, said Al-Selwady. Abdul-Kareem is one of two former world champions that will fight at BRAVE CF 29, alongside Luan “Miau” Santiago.

Aside from that, the 15-fight card will feature a world Flyweight title fight and the KHK World Championship, a onenight, four-men, open weight tournament, with the winner getting a US$100,000 check plus the provisional ownership of the KHK belt, adorned with 6.2 kg of gold in what is going to be Asia’s biggest MMA event ever to take place.