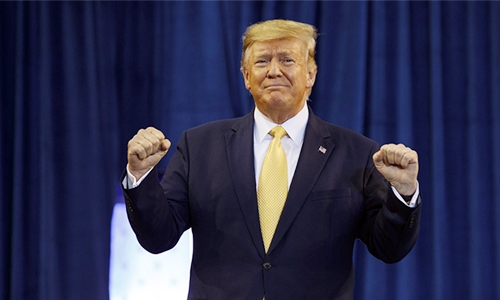 US President Donald Trump yesterday hailed the announcement of a “ceasefire” in northern Syria as a “great day” for Turkey and the Kurds. “We have a five-day ceasefire,” Trump told reporters, after US Vice President Mike Pence said that Ankara had agreed to suspend its military operation, and end it entirely once Kurdish fighters withdraw from a safe zone.

Trump has come under bipartisan fire in Washington for pulling US troops out of Syria, paving the way for the Turkish operation against the Kurds. Trump said sanctions on Turkey “won’t be necessary” now and heaped praise on Turkish President Recep Tayyip Erdogan. “He’s a hell of a leader,” Trump said. “He did the right thing.

“I have great respect for the president.” Asked whether he believed the ceasefire would last, Trump said “I think it’s going to last.” “I think President Erdogan’s very smart,” he said. “He wants it to last.”

In an extraordinary letter sent the day Turkey launched its incursion into north-eastern Syria, Trump has warned Erdogan “don’t be a fool” and said history risked branding him a “devil”. The letter, first obtained by a Fox Business reporter, was shorn of diplomatic niceties and began with an outright threat. “Let’s work out a good deal!” Trump wrote in the letter dated 9 October, whose authenticity was confirmed to various news outlets by the White House.