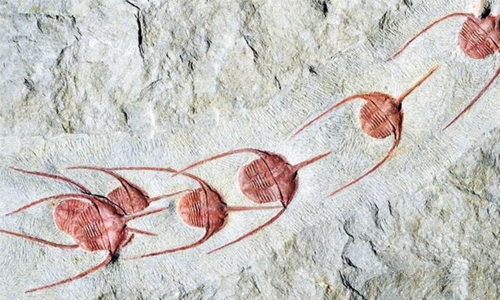 Fossils of tiny, horseshoe-shaped creatures that inched along the ocean floor in single-line formations some 480 million years ago reveal the earliest known collective animal behaviour, researchers said yesterday. The remains of now-extinct creatures called trilobites were almost perfectly preserved in the Moroccan desert near the town of Zagora, they reported in the journal Scientific Reports.

Like all arthropods -- a phylum that includes insects, centipedes, spiders and crustaceans -- trilobites had a segmented body and an exoskeleton. The fossil find shows a dozen of the coin-sized animals in a row all facing in the same direction, separated only by the length of two tapered spines trailing in an inverted “U” and touching the animal next in line.

“We are talking about the oldest display of organised collective behaviour in such a precise manner,” co-author Abderrazak El Albani, a scientist at France’s National Centre for Scientific Research, said. Group behaviour among animals -- schools of fish, flocks of birds, herds of antelope -- has been exhaustively studied by biologists, but little is known about when or how it originated.