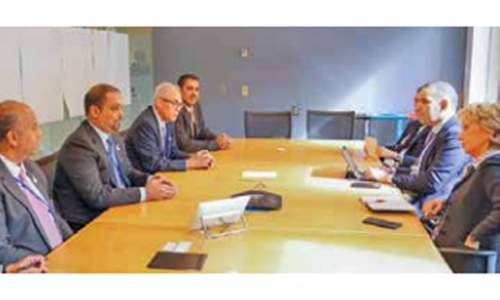 Bahrain is on track to achieve all its objectives outlined in the Fiscal Balance Programme (FBP), the Finance Minister said. Citing positive results in the first half of 2019, Shaikh Salman bin Khalifa Al Khalifa stressed that the Kingdom is now in a position to better compete in the global economy, thanks to developments across a wide range of indicators in line with Bahrain’s Economic Vision 2030.

The Minister of Finance and National Economy was participating in a showcase on sustainable growth and gender balance in Bahrain in Washington. Explaining, the minister said the Kingdom’s deficit fell by 38pc in the first half of 2019, compared to the same period of 2018. Non-oil revenues increased by 47pc, Oil revenues increased by 10pc and Expenditure reduced by 14pc during H1 2019.

The spotlight was also on Bahrain’s achievements in streamlining building permits through ‘Benayat’, a process that allows building permits to be issued within five days, initiatives to develop the role of women as well as progress in Bahrain’s transport and logistics sector.